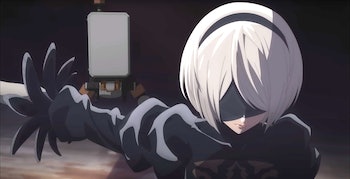 NieR: Automata, one of the best games of 2017, is getting an anime adaptation. The project was initially announced in February, but now there’s a release date and a lengthy teaser for the upcoming adaptation. Series creator Yoko Taro seems keen to deliver a new way for people to experience the game’s philosophical story but has also teased that returning fans will have something to look forward to. In a time with so many video game adaptations, NieR is the perfect property to take advantage of a recent trend in adaptations to expand a game’s world beyond the main story.

Something old — Video game adaptations are a mixed bag that hit every point on the spectrum from terrible to meh to really good. In every case, adaptations offer us a way to experience a story even if we’re not particularly interested in playing the video game.

For those who don’t love Platinum Games’ brand of hack-n-slash or don’t have the time to put in the 37 hours, it takes (according to HowLongToBeat.com) to reach the true ending of NieR: Automata, the upcoming anime is a great way to experience one of the best video game stories of the last decade.

The footage shown off during Aniplex Online Fest 2022 over the weekend lifts several shots directly from the game and recreates them faithfully.

Even the original Japanese voice actors for 2B and 9S are reprising their roles for the anime. On the surface, it looks like fans can expect a pretty faithful adaptation of the game’s story.

However, when the subject of the game’s story came up, Yoko Taro said that “copying it as is wouldn’t make an interesting story for an anime” which means what exactly? “So, I brought up the idea of changing things around,” he said. By bringing new story elements into the adaptation, the NieR: Automata anime will learn the biggest lesson from recent successful game adaptations: It’s about the world, not the game’s story.

Something new — Nearly two years after Cyberpunk 2077’s disastrous launch, it is currently one of the bestselling games on Steam. While CD Projekt Red has spent a lot of time fixing the game and repairing its reputation with the community, none of those are the reason for this sudden spike in interest.

On September 13, 2022, the Netflix anime Cyberpunk: Edgerunners was released. The series takes place one year before the events of the game, following a cast of characters completely separate from V and Johnny Silverhand. Instead, Edgerunners tells an original story in the world and made audiences fall in love with its characters. After finishing the show, people wanted to be back in that world and returned to Cyberpunk 2077.

By diverging from the plot of NieR: Automata in adapting the game to anime, Taro and the rest of the production team are giving fans new and old something to invest in. To signal that this will not be the exact same story that the game tells Taro officially titled the anime NieR: Automata Ver1.1a.

The anime adaptation will be directed and co-written by Ryouji Masuyama who has previously worked on the Rebuild of Evangelion films, which are themselves retellings of Neon Genesis Evangelion that create new plot points and endings. Taro is a known fan of Evangelion, having referenced the series in the original Drakengard.

The NieR franchise is no stranger to retelling a story with different outcomes. NieR and NieR: Automata both feature multiple endings, and the remake of the original NieR received the full title NieR Replicant ver.1.22474487139... Fans later discovered the remake featured new content that added to the original story.

Fans of the game and those who are just excited about the anime are both left in the dark about what Taro will or will not change in NieR: Automata Ver1.1a. By extending the world of the game the anime’s release in January 2023 will be a much-anticipated event.

Nier: Automata is available now on PS4, Xbox One, and PC. It is coming to Nintendo Switch on October 6, 2022.