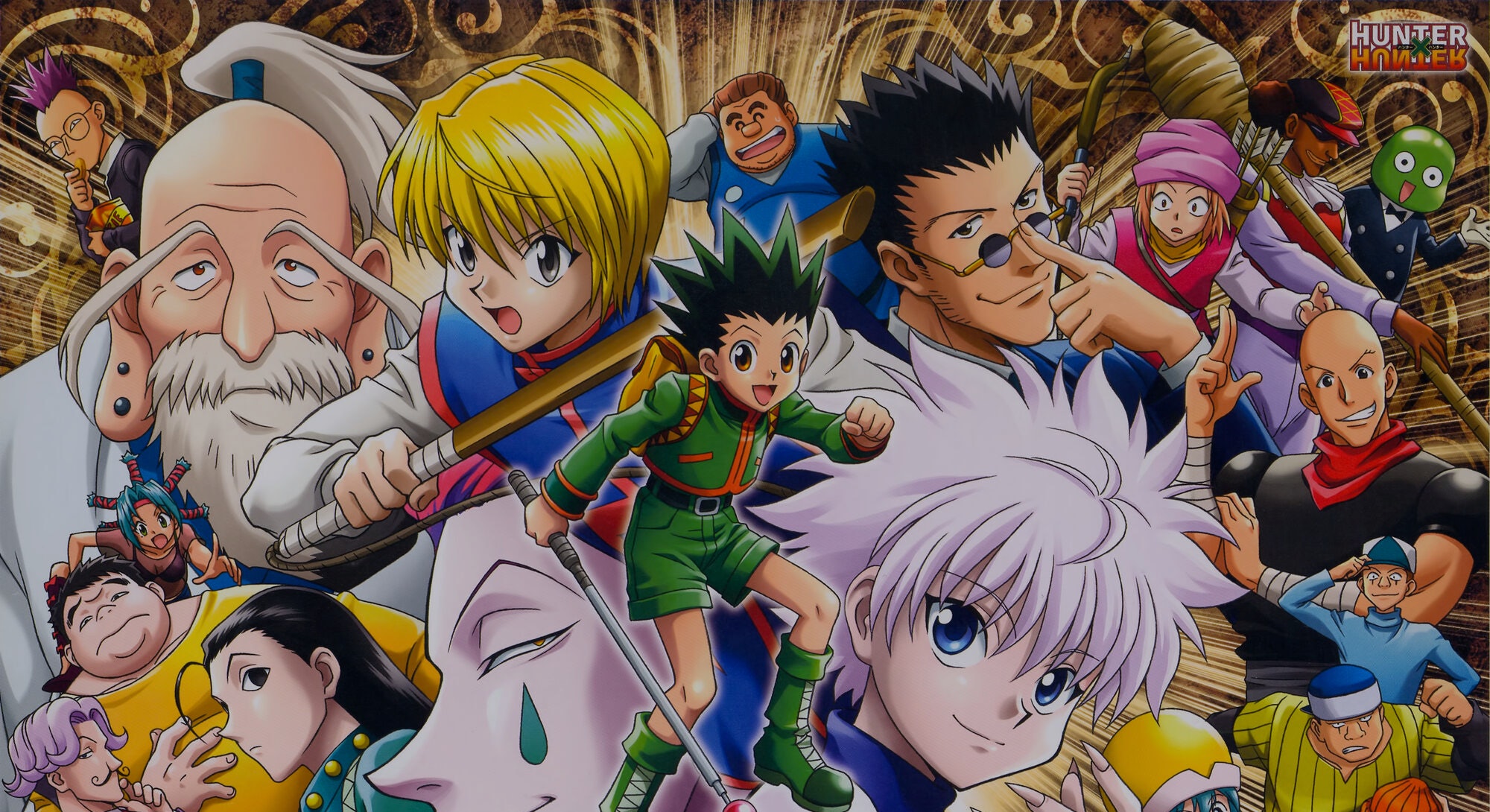 My older sister ensured that Sailor Moon was an early favorite, and I spent many late nights binging all kinds of shows when I was a teenager. Among all the shōnen (action anime typically marketed to teenage boys) I’ve watched, the one that’s impacted me the most is Madhouse Studio adaptation of Yoshihiro Togashi’s manga series Hunter x Hunter, which premiered 10 years ago in October 2011.

Admittedly, many shows I indulged in when I was younger don’t hold up in retrospect. Hunter x Hunter, though, is truly a cornerstone for the shōnen genre. Its animation is dynamic and riveting, its cast thoroughly entertaining, and its score is some of the best music in anime. But where Hunter x Hunter truly becomes transcendent is in its writing in the singular way it develops its intricate themes.

More than another run-through of the hero’s journey, Hunter x Hunter treats the idea of growing up with deftness and complexity, so much so that, the first time I watched it, it didn’t just challenge its hero to confront a world that’s messy and dangerous but nonetheless worth exploring. It challenged me to do so, too. Whether it’s exploring something simple like moving away from your childhood home or weightier subjects like working through a traumatic and abusive childhood, Hunter x Hunter is a masterpiece of storytelling, one whose impact is still felt in popular shōnen today. If it’s still somewhere on your watchlist, it’s worth making it a priority. If you’re lucky enough to call it a childhood favorite, you can’t go wrong with a rewatch.

Hunter x Hunter follows Gon Freecss, a 12-year-old boy who leaves his small island home to become a Hunter. Licensed members of an elite group of explorers, Hunters discover new lands, seek out treasures, catalog endangered animals, and even collect bounties on criminals. Gon’s father abandoned him at birth to continue his quests as a Hunter, and Gon seeks to follow in his footsteps in order to find and finally meet his dad (unhealthy father-son relationships are a frustratingly common shōnen trope). What begins as a mere scavenger hunt unfolds into a sweeping story traversing multiple genres: neo-noir, political thriller, even meditative sci-fi. Despite its steadily increasing scope and a massive cast of characters, Hunter x Hunter is assuredly Gon’s journey.

HXH 2011 is stunningly animated as it streamlines the heft of Togashi’s story and lore into an engaging narrative that builds on itself without sacrificing character development or emotional stakes.

“The expansive world-building matches the growth of its protagonist.”

The first arc, or “chapter,” is deceptively simple: Gon meets his best friend, Killua Zoldyck, and two other companions, Leorio Paladknight and Kurapika. They band together to endure the difficult Hunter Exam to acquire their Hunter licenses. It’s a breezy romp, with fast-paced action that maintains a light tone. In its first episodes, though, HXH reveals a darker world hiding beneath its brightly colored exterior. From Killua’s cold-blooded murder of an opponent using only his fingernails to Gon’s vicious self-mutilating sacrifice to secure a Hunter license, the Hunter Exam Arc lays the groundwork for the increasingly dark tone the rest of the series will settle into.

Rather than shock the audience with a big twist or catastrophe that completely redirects the story’s aesthetics and focus, HXH subtly builds in its foreboding tension until, at last, the series fully transforms. Gon’s straightforward quest to find his father bleeds into gang conflicts, violent revenge quests, and even an alien invasion. Yet, as you sit through the whole story, none of this ever feels as if it’s brought in out of nowhere.

The expansive world-building matches the growth of its protagonist. He’s lived his whole life on an island. As his world expands, so do its conflicts and secrets, and his entanglements grow ever deeper. The world becomes less black and white. Gon’s story is no longer a simple question of defeating a villain or stopping a bad thing from happening. Leaving binary morality tales behind, Hunter X Hunter seeks to ask deeper questions, often choosing to leave the viewer with the pieces to construct their own answers rather than provide them outright.

It’s in its intelligent thematic construction that Hunter x Hunter’s impact is felt most of all. My Hero Academia’s creator Kōhei Horikoshi and Jujutsu Kaisen’s creator Gege Akutami both cite Hunter x Hunter and Togashi as major inspirations for their popular manga series, which in turn have become massively popular (and faithfully adapted) anime. In the last few years, these two stories have exemplified the next generation of shōnen. Both the manga and their anime adaptations make use of classic genre tropes (complex magic and combat systems, young male protagonists, and thematic fixations on growing stronger) that HXH elevated. MHA and JJK have strived for the same, with varying levels of success.

Across HXH’s six multi-episode arcs, Gon is confronted with characters and events that not only force him to question the juvenile, black-and-white worldview he holds at the story’s start, they completely upend it. Supposed villains reveal humanity and depth. Conflicts aren’t always solved by shows of strength or bloody battles, but with careful conversations.

My Hero Academia and Jujutsu Kaisen borrow from this heavily. Hundreds of chapters into their stories, heroes are no longer preoccupied with simple quests. Like Gon before them, Midoriya (MHA) and Itadori (JJK) are forced to reevaluate everything about the world around them, and whether or not what they fight for is worth the harrowing sacrifices they are forced to make.

A major shōnen trope is that of the self-sacrificing hero. (This is not unique to shōnen; one could argue it’s central to many of the world’s religions.) These protagonists are expected to do whatever it takes to achieve their goals, no matter the toll it on their bodies and minds. Their physical and mental deterioration is often part of what makes each a fully-formed hero by the journey’s end. The impact of their suffering on their relationships, their beliefs, or even their sense of self often goes unremarked in these narratives, though the stories often ascribe a nobility to their anguish.

HXH, however, takes the time to interrogate this as something more than just the expected path of a hero. Gon’s zeal for self-sacrifice becomes toxically tethered to his misconceived notions of honor and revenge, as well as his own self-worth. This alienates him from allies and loved ones. Moreover, Hunter x Hunter explores the effect this has not just on Gon but on Killua, his constant companion. Gon’s self-harming behavior not only puts his own self in jeopardy but causes immense harm to those he holds dear.

The examination of Gon’s character, his downward spiral, and how it reveals his shortcomings was particularly striking to my younger self. HXH is a fantastical story, hardly ever resembling the real world, but I found Gon’s dilemma startlingly familiar. It served as a reflection of issues I struggle with, the weight of my mental illness, and how my brain can be my own worst enemy. Like Gon, sometimes I’ve been so consumed by my own sadness it’s pushed me away from the very people who could help me find a way out.

Gon’s emotional journey is handled with rare maturity. He understands the error of his ways, finding his way out of the darkness through a combination of personal growth and the support of his loved ones. He learns and grows to become a better man and friend. That such growth was possible was a vital lesson for me and a confirmation of how special a story this is. While it can be grim and serious, HXH does not lose itself in sadness and grief. Togashi’s story is ultimately one that focuses on love and friendship, and how vital it is to never lose sight of that. It’s a genuinely uplifting tale.

My Hero Academia and Jujutsu Kaisen have both developed worlds that expand far beyond what our protagonists experienced in their young lives. Like Hunter x Hunter, they marry a cerebral story with complex emotions. However, to my taste, both take too much from Togashi’s darker instincts without the welcome counterbalance of levity.

Even HXH’s famed Chimera Ant Arc, the darkest chapter of the story, featured a wide cast of characters with various perspectives, alleviating the tension. As a result, their stories have evolved into grimmer adventures but lack the strong tethers between characters and thorough introspection that propelled Hunter x Hunter into something truly great.

That isn’t to say that these relationships or story beats are nonexistent in MHA or JJK. The bonds between their respective protagonists and their friends and mentors are very much palpable. The difference is that a lot of that development occurs earlier in their stories, and has since taken more of a backseat to plot and loftier ideological discussion. They lack the steady interweaving of the two that HXH was able to sustain.

“I’ve been deeply impacted by this story and all that it’s taught me about growing up.”

My Hero Academia and Jujutsu Kaisen are engaging stories, all the better for the influence they’ve taken from Togashi as a storyteller. Their relative flaws reveal just how unique Hunter x Hunter is. Almost every week, some singular frame or fight sequence from Hunter x Hunter 2011 goes viral on Twitter.

But what’s most stunning is that, after all these years, people are still struck by Hunter x Hunter’s story. Beyond its visuals or worldbuilding, people still remember whole conversations between characters or swaths of dialogue. What sticks is the overwhelming emotion, the characters that we get to know intimately, the physical and emotional journeys that Gon and Killua go on. More than anything, I consider it a resonant coming-of-age tale. I’ve been deeply impacted by this story and all that it’s taught me about growing up, and the comfort it provides as it assures me there’s no one right way to do that.

All this cements a single fact: no matter how many years pass, Hunter x Hunter is a singular experience.