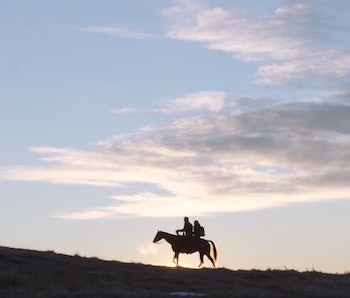 In the lore of The Last of Us, September 26 is Outbreak Day, when the Cordyceps infection began its pernicious spread across the globe, leaving a ruined world in its wake. So it’s fitting that the folks at HBO seized upon the occasion to reveal our first in-depth look at the upcoming adaptation of the iconic PlayStation masterpiece. And the 90-second trailer revealed that an important figure from Ellie’s past will shape Bella Ramsey’s version of the character.

Right around the 50-second mark in the trailer, we see Ellie and another girl exchange tender smiles while riding a carousel. It’s one of few peaceful, happy moments in this tense and gloomy trailer. You can check out the trailer in full here:

Fans of the games will notice a familiar face at the 50-second mark.

This girl is Riley, who Ellie meets in her hometown (the Boston QZ) before the events of the first game. Riley is a main character in the Left Behind DLC and the four-issue American Dreams comic miniseries. Riley sees the younger Ellie as dead weight at first, but they eventually grow closer. It’s through Riley that Ellie develops her fascination and faith in the cause of the rebel organization known as the Fireflies, which becomes a central plot element of The Last of Us Part I.

Including Riley in the series is also a big hint that the HBO adaptation will embrace Ellie’s queer identity early on. This is in keeping with a March 2020 promise made by series writer and producer Craig Mazin. When a fan insisted “Y’all better keep the gay gay,” Mazin responded, “You have my word.”

While Ellie doesn’t mention any crushes or romances in the video game version of The Last of Us Part I, the side material explores her deepening bond with Riley, which eventually culminates in a sweet kiss. But since this relationship wasn’t part of the main game, some players were surprised to see Ellie romancing another woman in the early trailers for The Last of Us Part II.

Ellie and Riley share an emotional moment in Left Behind.

Riley’s appearance in this debut trailer is an encouraging sign that the series won’t omit or sidestep this part of Ellie’s story, as the original game did. Back in 2012, creative director Neil Druckmann told VG24/7 that Naughty Dog had been asked to “push Ellie to the back” of the game’s box and not make her a focal point of the marketing. A lot has changed in the decade since then.

This isn’t the first official word we’ve had that Riley would appear in the series. Deadline announced that Euphoria and A Wrinkle in Time actor Storm Reid would guest star in The Last of Us back in January 2022. According to IMDb, Storm Reid will appear in two out of the 10 episodes that make up Season 1 of the series.

What’s still unclear is when and how we’ll see Riley appear in the story. Will the first couple episodes introduce us to Joel and Ellie before their paths cross, or will we learn about their pasts in flashbacks? We’ll find out more as the lead-up to the 2023 launch of the HBO series continues.