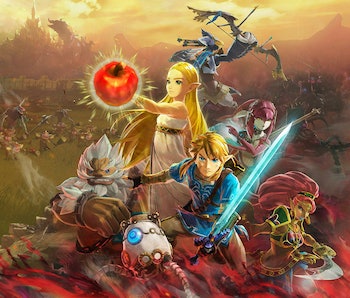 The Legend of Zelda: Breath of the Wild's new prequel, Hyrule Warriors: Age of Calamity, starts out feeling like an easy button-mashing musou game where you take on hordes of Bokoblin and Lizalfos. But as the game progresses and Calamity Ganon's forces grow in power, the difficulty ratchets up considerably. So the game's only healing item, the Apple, becomes one of the most important items you can — and should — farm so you always have them maxed out.

But where's the best place to do it? We're breaking it down below.

How does healing work in Hyrule Warriors: Age of Calamity?

During combat levels, pressing the L button slows down time and opens up a menu that lets the player choose between three Elemental Rods for Fire, Ice, and Lightning magic. These meters are replenished by mana orbs dropped by Wizzrobes of the corresponding element, along with other infused enemies.

The fourth option mapped to the B button is for the Food Meter which is replenished by apples. Like mana, your Food Meter is shared across all characters, and the levels carry over between battles.

The three elements are easy to replenish by farming the Anti-Ice, Anti-Flame, and Anti-Lightning Training sessions from relatively early in the game. But these apple drops, however, are much less consistent.

There are still some strategies that can be very handy to track them down, however.

Where to find apples in Hyrule Warriors: Age of Calamity

The best place to find apples is to smash every barrel and crate you encounter. In some cases, you might spot some just outside the playable area, which means they aren't an option. But if you see any bulky objects made of wood, start smashing. It's also worth using the magnet-shaped Magnesis power to pick up and smash any metal boxes you come across as well.

Apples are also dropped by enemies at a very small rate. Some players have found success replaying the very first story mission called "The Battle of Hyrule Field" as a way to farm for apples. At least one other suggests "Mastering Remote Bombs," which is perhaps the single shortest and easier scenario of them all.

but that can be adjusted through some weapon seals/skills. It's therefore a good idea, particularly by the late game, to construct a farming weapon for each character.

On the flip side, you might also consider a weapon focused entirely on healing: Healing-Item Effect and Damage at Full Hearts work really well with Healing-Item Drop Rate. Your healing will be more potent, you'll deal more damage when at full health, and you'll receive apples more frequently.

Don't forget that by matching seals on a weapon, you can further boost its potency!

Read Also: How to craft the best Hyrule Warriors: Age of Calamity weapons via fusion

How to make a Baked Apple in Hyrule Warriors: Age of Calamity

Perhaps the most important and easy-to-miss pro-tip when it comes to healing? Baked Apples.

Unlike the stat-boosting meals you can cook before every mission, the Baked Apple is essentially an improved version of a regular apple that allows the player to recover more health. The recipe is simple:

Before you pick up an apple drop, cast a fire spell or trigger something like an exploding barrel to ... "bake" the apple. The same effect also happens if your character is actively taking fire damage when they pick up an apple.

Other ways to heal in Hyrule Warriors: Age of Calamity

Apples aren't the only ways to heal your characters. In the midst of combat, characters will heal to full health if they level up (so the Battle EXP weapon perk might be worth considering for that reason alone).

Some missions, like Chapter 2's "Daruk, the Goron Hero" have Hot Springs in them. All you need to do is stand in the springs for a few moments, and they'll restore health.

A much more consistent method of healing, however, is to use the Zora princess Mipha in your party as often as possible. All versions of her strong X attack create whirlpools. Pressing ZR repeatedly to attack an enemy in this manner restores a small amount of health to allies. Best of all, her special attack creates a giant wave that heals all allies within range. So particular on tougher bosses where the whole squad is involved, she's one of the absolute best fighters to have on the field.