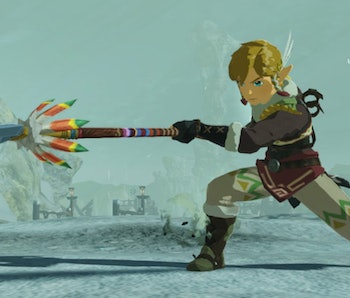 Hyrule Warriors: Age of Calamity takes a distinctively different approach to weapons when compared to The Legend of Zelda: Breath of the Wild. Weapon durability has been replaced by a new upgrade system called Weapon Fusion or Fusing.

A prequel to Breath of the Wild, the new Age of Calamity takes place a century earlier as war breaks out across the land. Rather than intimate battles and puzzle-solving accentuated with lots of exploration, Age of Calamity is instead all about the spectacle of big battles as a handful of iconic characters mow down hundreds and thousands of enemies.

Along the way, players loot tons of swords, axes, and boomerangs, but each of the game's characters can only hold a total of 20. Keeping everything you loot will quickly become impossible, which is why Age of Calamity encourages you to either sell weapons you don't need or, even better, infuse them into your favorite weapon to increase its power.

We want to hear from you! Take the ultimate Zelda: Breath of the Wild 2 survey now.

You'll gain access to this feature fairly early in the story, but Age of Calamity never quite explains the nitty-gritty about building the perfect weapon for each of its characters.

Where to Fuse Weapons

The Hylian Blacksmith Guild takes care of all weapon fusing and can be found directly South of the Korok Forest and Northeast of Hyrule Castle.

The quest to unlock the services of the blacksmithing guild becomes available after the second level of Chapter 1, so you don't have to worry about discarding loot even early on. Speak with Cedro the Blacksmith to begin upgrading the best weapons you've found after decimating hundreds of enemy forces.

Cedro will either buy your weapons from you with Rupees or fuse them into an arm of your choosing. Keep in mind, it costs Rupees to fuse weapons, so make sure you have enough to spare before you start

Before you begin improving your arsenal, you'll need to choose which character's weapon you want to improve since each member of Age of Calamity's roster has its own unique weapon archetype. Once you select a character, you'll be placed in that character's inventory where you can begin fusing.

Your currently equipped weapon is highlighted in blue and everything else is an item you have stashed in your bag. Select the weapon you want to improve by navigating to it and pressing the A-Button.

You can select up to five weapons as Fusing Materials which will be destroyed and converted into experience points that will level up the weapon you've chosen to strengthen. But increasing a weapon's level is the only thing Fusin can do.

How to add new weapon abilities

Fusing also lets you improve existing weapon abilities and add new ones to a specific item. Choose a weapon with an ability that complements your playstyle with that particular character. Link and his buddies each get a unique starter weapon, which is a good place to focus your infusion fuel. But don't be afraid to experiment with other abilities that will come with the loot you'll find throughout Hyrule.

Every fifth level, a new ability slot will be added to the weapon you're powering up. This will let you transfer the ability of another weapon to your favorite item, but there's a specific action to guarantee you'll get the ability you want to be transferred to your main weapon.

The blacksmith pulls the first available skill from Fusing Materials, which means the ability of the first item you choose to be a Fused will be transferred to your main weapon if there's an empty slot. So always choose the weapon with the power you want first in order to get it onto your main.

Each weapon has a maximum level of 20, so only four abilities can be stacked into one weapon. Sometimes it's worth holding off on Fusing a mediocre ability to your main weapon until you loot a weapon with a powerful ability a little later on in the game.

Alternatively, you can start fresh with a new weapon whenever since there's so much loot to be found throughout Age of Calamity.

Hyrule Warriors: Age of Calamity is out now for the Nintendo Switch.