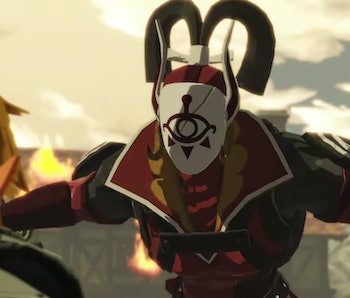 Hyrule Warriors: Age of Calamity had big shoes to fill ever since The Legend of Zelda: Breath of the Wild's prequel was announced in early September. BotW still stands as one of the most stunning open-world games to date set in a universe with over three decades of history. And yet it has one fatal flaw: a bare-bones story.

That's where Age of Calamity was supposed to step in. Set 100-years before the events of BotW, the second installment of Koei Tecmo's Dynasty Warriors-inspired, Hyrule Warriors spin-off was supposed to shed some much-needed light on the cataclysmic Great Calamity that led to the Hyrule fans saw in BotW.

Unfortunately, a mixed bag of reviews suggests that while Age of Calamity might be the best Dynasty Warriors game to ever be released, it never quite lives up to the standards of a BotW prequel.

Dynasty Warriors is a hack-and-slash series that has long prided itself in its one-versus-1,000(ish) battles where players get to decimate hordes of enemy soldiers. Age of Calamity does exactly that, but places gamers in the shoes of Link, Zelda, all of the Hyrule Champions, and many more BotW icons. It sounds ridiculously fun for anyone who dreamed of fighting droves of Bokoblins with Link's allies — like Urbosa and Revali.

In this sense, Age of Calamity is nothing short of a thriving success. But from a narrative standpoint, it misses the mark.

A loving ode to Breath of the Wild

IGN's Cam Shea wrote a glowing review of title, describing Age of Calamity as a "love letter to Breath of the Wild." All of the most memorable characters, powers, locations, and even Easter Eggs from Nintendo's open-world adventure have been expertly remixed to fit the Dynasty Warriors genre. Age of Calamity might have even overshadowed Breath of the Wild in certain aspects.

One of its levels lets players pilot the Divine Beasts to take on a particularly massive swarm of enemies, which Eurogamer's Martin Robinson describes as particularly awe-inspiring.

"It's about as therapeutic as it gets, the video game equivalent of popping bubble wrap and a power fantasy delivered in a laid-back fashion," he wrote.

Inverse was particularly impressed by the fact that you'll be able to use spare weapons to improve your favorite sword, hammer, or axe. BotW's weapon durability system was one of the most loathed parts of the Nintendo release and the fact that Koei Tecmo included this tweak to it is evidence that the devs listened to fans.

And for anyone expecting a low-budget take on BotW, Age of Calamity is far from it. The Verge's Andrew Webster notes how the spinoff delivers on some satisfying voiced cutscenes and narrated moments. It had all of the ingredients to be one of the best works of fan service in recent memory, but it under-delivered in the department where it was supposed to shine the most: lore.

Reviews across the board noted that Age of Calamity missed the mark when it came to establishing the backstories of fan-favorite secondary characters, like Urbosa and Daruk, and fill in the gaps that BotW left. Kotaku's Ash Parrish put it most succinctly.

While no review gives away too much, Age of Calamity's plot culminates in what is expected to be a heart-pumping, thrillride of a finale that lands flat on its face and even conflicts with BotW's story. GameSpot's Suriel Vazquez calls it a "fatal misstep" for a title that was billed as the game that would answer the questions BotW didn't address.

In essence, Age of Calamity is indisputably fun, but Zelda fans will need to wait for BotW 2 for any real narrative payoff.

Hyrule Warriors: Age of Calamity releases on November 20 on the Nintendo Switch.