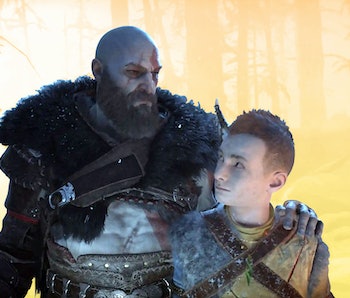 Kratos has always been the star of the God of War series. Whether in its hack-n-slash sex mini-game days or his more reserved time as a father, the franchise has been a story of one man. The introduction of Kratos’s Son Atreus in God of War (2018) gave him something more to care about, earning it the title of the ultimate dad game. But the early hours of God of War: Ragnarök flip the script entirely, putting Kratos in a supporting role, by letting Atreus take charge.

Bring your son to work — While Atreus is your constant companion throughout God of War (2018), acting as an emotional foil to Kratos, mechanically he is all but a tool. Atreus’s purpose is to fulfill the player’s commands. As Kratos, you tell Atreus what to aim at and when to fire — he does not enact his own will. This reflects the story as well, which is centered around Kratos.

The 2018 game is a somber look at Kratos’ identity, in which the player and the God of War himself re-evaluate who he is and what he stands for. Can the one-time god of war and god-killer care for another? Can he be a good dad?

The 2018 reboot/sequel followed in the footsteps of many AAA linear narrative adventure games that feature a prominent companion character. While added for emotional depth in the story, these titles so often fail to deliver mechanically in the same way as games like Ico, which are the direct inspiration for games like God of War (2018) or The Last of Us.

However, Atreus is all grown up in Ragnarök, and ready to make his own choices.

Kids these days — With Fimbulwinter in full swing, and the approach of Ragnarök (the Norse apocalypse) Kratos is content to shelter himself and Atreus from the rest of the world. He is no longer a man who desires to go against the gods, even if he knows the Norse gods will come seeking revenge for his actions in God of War (2018). Atreus is a different story.

Now older, Atreus is restless. Like all teenagers, he is in a rebellious stage. He sees the impending Ragnarök and wants to take action, even take the fight to Asgard itself. Atreus becomes the driving force of the story, pushing his father to follow him. In the early hours of Ragnarök, Atreus asks Kratos to trust him to lead the way for both of them, and as the player we do.

There are no longer any moments where Kratos mutters “boy” in a gruff tone, rather he refers to Atreus by name, seeing him as a person deserving of mutual respect. Atreus will run ahead of us, taking the initiative to find the path, pointing out obstacles, and asking us to break them down. The first journey the two take to the realm of Svartalfheim relies on Atreus’s guidance and suggestions on how to finish environmental puzzles. It is your job as Kratos to support him and clear his path forward.

Where the story of God of War (2018) was Kratos’s, Ragnarök is a story of Atreus. No longer a parent struggling to accept the responsibilities of parenthood, Kratos is now a parent who needs to learn to let his child take the lead for once and be their own person. Mechanically though Kratos is still the player character, he fulfills much of the companion role.

The opening hours of God of War: Ragnarök presents a stunning sequel to its 2018 predecessor. It meaningfully builds on the story of Kratos as a father and what it means for a parent to shepherd a child into adulthood, including the inevitable need to let them grow beyond you.