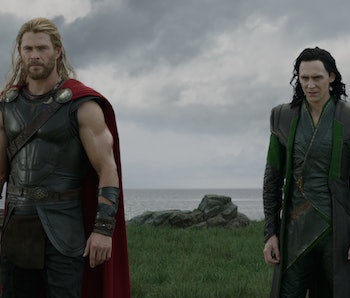 Taika Waititi’s Thor: Ragnarok does a lot of weird things and goes to a lot of strange places, but the craziest thing to happen in the movie has everything to do with, well, Ragnarok itself.

Major spoilers for Thor: Ragnarok and the Asgardian apocalypse follow.

You’d think that the destruction of Asgard would come at the hands of the film’s principal villain, Hela, the Goddess of Death. (Actually, you might not expect Asgard to actually get destroyed at all, since these movies usually don’t have quite so dire endings). Hela draws power from Asgard, and can materialize Necroswords of all shapes and sizes, flinging them about with her telekinetic powers. Hela also uses a magical firepit called the Eternal Flame to reanimate tons of undead soldiers and her monstrous black wolf Fenrir. She might be the film’s Big Bad, but it’s sort of a fakeout all along.

In “real” Norse mythology, Ragnarök is your run-of-the-mill apocalypse resulting in lots of death and destruction. Within Marvel comics, it represents a cycle of death and rebirth that climaxes with the destruction of Asgard. Over in the MCU, the only slight difference is that Thor has visions of Asgard getting totally destroyed by fire, he spends the movie trying to prevent it yet ultimately causes it himself.

When Thor: Ragnarok opens, the God of Thunder is imprisoned in the lair of a hellish-looking fire demon named Surtur. The opening sequence does a great job of re-establishing Thor as a badass, introducing the film’s humorous tone, and offering up a really fun spectacle to watch. He takes care of Surtur, kills his pet dragon, and makes it back to Asgard in time to depose the false king. Normally, you’d think that after Thor ripped Surtur’s crown off, he’d just lock it in Odin’s vault and that’d be the last we ever saw of him.

But when the “Revengers” can’t defeat Hela in battle, they realize the only way to get rid of her is to deliberately cause Ragnarok by summoning a fully-powered Surtur. The Asgardian survivors leave on an arc stolen from The Grandmaster, but a gigantic Surtur kills Hela (presumably) and reduces Asgard to a pile of dust, Alderaan-style. Thor’s now the ruler of a migrant race of people, most of the friends he grew up with are dead, refugees en route to Earth.

The first post-credits scene of Thor: Ragnarok makes it seem like someone powerful has a very different idea in mind for Thor’s ship.

If the Avengers: Infinity War trailer played at D23 and Comic-Con is any indication, then Thor’s bound for a meeting with the Guardians of the Galaxy before long. It’s going to be a rough, wild ride for the God of Thunder.

Thor: Ragnarok is now in theaters.