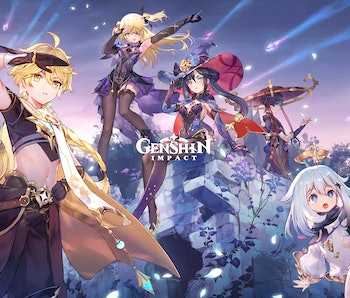 Segmented into three distinct subevents that tell an overarching story, Unreconciled Stars introduces Fischl into the main narrative while featuring a mix of co-op and single-player activities and new collectibles to find around Teyvat.

Here's everything you need to know.

When are the Genshin Impact Unreconciled Stars start and end times?

Each sub-event in Unreconciled Stars has a different start date. Each one will be available on the stated date by 4 a.m. Eastern time. These have been listed in order of release.

Once introduced, these three subevents will all be available until December 6 at 4 a.m. Eastern.

How do you start Unreconciled Stars?

To begin the Unreconciled Stars event, you'll need to reach Adventure Rank 20 and talk with Katheryne at the Adventurer's Guild in Mondstadt. She'll assign you the inciting incident, "Unknown Star." That will unlock the first phase, also called Unknown Star.

To unlock the second phase, Star of Deceitful Dreams, you'll need to complete the quest titled "The Crisis Deepens" on November 18.

For the final phase, Star of Destiny, you have to complete "What the Skies Conceal, the Water Reveals" to kick things off on November 23.

What are the Unreconciled Stars quests?

What is the Unknown Star?

The first phase, the Unknown Star, kicks off the whole ordeal and it's a single-player only event. You're introduced to everyone's favorite playable character (at least by miHoYo's metric's), Fischl. Meanwhile, dangerous meteorites scatter across Teyvat.

To complete every task in this phase, you'll need to find at least seven Meteorites in three different areas across Teyvat.

You can track your progress in the Unreconciled Stars event menu. For every task you complete in this phase, you'll earn Fading Star's Might, which can be spent in the event shop.

What is the Star of Deceitful Dreams?

For the second phase, you'll need to salvage larger meteorites found across Teyvat. Unlike the previous phase, this one can be played in co-op mode. Each Meteorite plays similarly to how leylines normally work. Players need to defeat a few waves of enemies. If you emerge victoriously, you'll need to spend 20 Resin to claim your reward and the meteorite will be considered "salvaged."

You can choose how difficult you'd like each battle to be. The higher that you set the level to, the better the rewards you earn will become.

Again, you'll earn you Fading Star's Might to spend in the event shop. There will also be milestones for every five meteorites you're able to salvage, rewarding you 30 Primogems for each one reached.

What is the Star of Destiny?

For the final phase, you need to go to certain locations to defeat waves of enemies to charge up a massive Fallen Star. If you emerge victoriously, it will cost 40 Resin to claim your reward. It's comparable to the main co-op level from October's Elemental Crucible event.

Emerging victoriously will earn you Fading Star's Essence, which can be exchanged in a different half of the event shop for various rare enhancement materials.

You'll gain three new event-only single-player quests in this phase, too. They'll award Fading Star's Essence rather than the usual Fading Star's Might.

What characters have increased damage for Unreconciled Stars?

While playing the phase two and three activities, nine characters will receive a 60 percent attack boost. Play as one of these bad boys to have a slightly easier time:

What are the Unreconciled Stars event rewards?

You'll gain most of your rewards by using the event shop. While there, you can easily unlock new Enhancement Materials for all your characters. Notably, this includes the Crown of Sagehood, which is necessary for unlocking the final level of your character's talents.

You'll also earn numerous Primogems and the ability to unlock Fischl, who is a fantastic four-star character.

Is Genshin Impact's Unreconciled Stars event worth it?

Yes, the event is worth your time, but you should enter it focused on one to three things you'd like to gain from it to avoid being inundated with a gazillion things to complete before it ends on December 6. If you're at a loss for where your focus should go, Fischl and the Crown of Sagehood are the rarest items available in the event. Both are fairly difficult to obtain and are great assets once you reach Genshin Impact's endgame.

Otherwise, you should focus on purchasing enhancement materials Talent and XP books. It's rare to find either in such abundance. You should take the chance to gain a lead on what you need to get ahead in Genshin Impact.