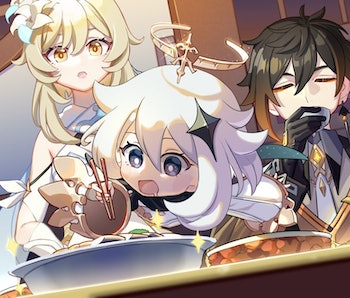 Here's everything you need to know about the Stone Harbor Treasure Journal event.

In China, the event began on November 2, 2020, and is currently planned to conclude on November 10. The team at miHoYo has yet to reveal precise times for the event outside China, though is likely to announce those times via Genshin Impact's official social media channels.

Presumably, this means it will arrive ahead of the 1.1 update, which is set to launch on November 11.

From the limited information available regarding the event, you'll get a part-time job in Liyue. You'll need to work under either Zhongli or Childe to complete small, visual novel-inspired tasks. You'll receive minor rewards after finishing each one.

After having completed every task in the event, you'll have earned a total of 200 Primogems and 50,000 Mora.

According to a MiHoYo blog post from their Korean Genshin Impact site, players will get one job attempt every day during the event and can earn up to three additional job attempts by completing specific daily tasks.

It's unknown how many attempts it will take for players to earn every reward.

Does the Genshin Impact Stone Harbor Treasure Journal web event have a story?

Yes! It has a cute side-story with the characters. Notably, this story isn't canon to the main game. Anything that happens in the site story is just for fan service purposes.

That's currently unknown. PS4 players have a history of being excluded from Genshin Impact bonuses. When miHoYo distributes code-based bonuses, as it did earlier this month, PS4 players are unable to redeem them. These codes are linked to user accounts, which cannot be tied to Sony systems, leaving PS4 players out of luck when it comes to redeeming those free Primogems.

Anecdotal player reports about the Stone Harbor Treasure Journal web event, suggest players receive a code after completing all the event tasks, which doesn't bode well for PS4 players. This issue could be circumvented if miHoYo allowed console players to complete the event via a browser launched from in-game, as it does for player surveys distributed via the mail system.

If this doesn't happen, PS4 players might just be out of luck this time around.