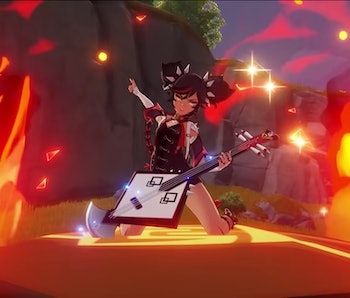 Genshin Impact can't stop giving out gifts to players. For the Lantern Rite Festival event, the game has given players numerous Primogems and free Wishes. Now, as part of a new event, anyone can unlock a free 4-star character from Liyue. But which one is worth getting?

Here's a breakdown of the Stand By Me event and which character you need to get your hands on.

When are the Genshin Impact Stand By Me event dates?

Stand By Me will be available beginning on February 18 and last until March 7 at 4 a.m. Eastern.

How do you get a free Stand By Me character in Genshin Impact?

To unlock your free Stand By Me character, you'll need to do a few things: First, reach the third Festive Fever stage "Glow of a Thousand Lanterns." Then you can choose a 4-star character in the Xiao Market. The character will cost 1,000 Peace Talismans (the Lantern Rite Festival currency) to redeem.

You can earn Peace Talismans by completing challenges in the Theater Mechanicus tower defense mode.

What characters are available in Stand By Me in Genshin Impact?

For the Stand By Me event, you'll be able to get one Liyue 4-star character for free. Here's a quick look at every eligible character:

Who is the best Genshin Impact Stand By Me character?

Each of these six available characters can be an asset to any team. But the top two characters that you should consider if you haven't obtained them yet or need to max out their constellations are Xingqiu and Xinyan.

Xingqiu is easily one of the best supports in the game. He can be a great sub-healer for your team. Xingqiu's abilities allow him to perform a trio of roles including a healer, defender, and damage dealer. Xingqiu's healing activates when he summons his Rain Swords. As each Rain Sword is destroyed, your team will be slightly healed. While active, the Rain Swords will reduce the damage taken by your team and apply the Wet effect to the characters you attack. Additionally, Xinqiu's Elemental Burst allows you to deal Hydro damage with every attack. Use this build to make Xingqiu perfect.

Xinyan is another great choice. She's an excellent support character. Her Elemental Skill shrouds your team in an immensely powerful Pyro shield. If she can hit enough foes when activating the shield, it'll also periodically deal out Pyro damage. She's a great asset to any team and will allow you to tear through Spiral Abyss stages with minimal injuries. Her Elemental Burst can deal Pyro damage throughout a large area, aiding in tearing down Hydro and Cryo Abyss Mage shields. Use this build to make your Xinyan unstoppable.