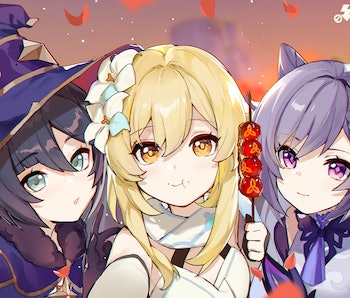 Genshin Impact features a massive world. The realm known as Teyvat features seven named regions with distinct cultures. So far, players have only experienced two of them — Mondstadt and Liyue.

According to the story trailer, the next nation to be added will be Inazuma. It's unknown when Inazuma will arrive, and it's unlikely to be included in an update anytime soon. However, a few leaks from files found on the beta test server have provided us a first look at a few new characters, including some who are seemingly from the upcoming region.

Before you keep going: How did gaming get you through the pandemic? We want to hear from you! Take this quick Inverse survey.

Those that don't explicitly showcase Japanese fashion identities hail from the more familiar settings of Liyue and Mondstadt. We currently have a few names, courteously of the Reddit thread.

From left to right on the top row:

From left to right on the bottom row:

Some of these characters have already been mentioned within official materials from miHoyo Yaoyao, for example, was previously featured in key art for Genshin Impact. She seems to be friends with Qiqi, the zombie character from Liyue. Rosaria was featured in the Dragonspine story missions as a nun from the Church. It's also rumored that she'll arrive in version 1.4. Hu Tao hasn't been announced yet, but she's rumored to arrive later in version 1.3. That leaves six characters that have yet to appear in any capacity.

In addition to the eight pictured above, there's another character named Tohama, who will allegedly be a Pyro Polearm user.

Genshin Impact news Twitter account Zeniet notes these test-server designs are unlikely to be final drafts, writing "keep in mind designs are not final." When these characters debut, they might look significantly different from how they're portrayed here.

It's unknown how many stars each character will have as well. These are just skeletons that have yet to have abilities given to them.