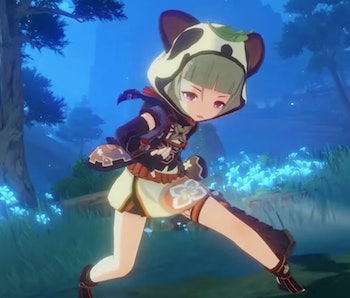 Healing is underrated Genshin Impact. If you’re free-to-play, having a support character who can mitigate the damage from tough weekly bosses and domain baddies can be the critical difference between triumph and disaster. The best healers in the game are usually costly five-stars like Jean and Qiqi, or they specialize in other things like Bennet and Barbara.

If you can build Sayu from the Yoimiya banner correctly, she could easily fill that sought-after role of a healer.

Here’s exactly what you need for the perfect Sayu build in Genshin Impact.

Despite her teeny stature, the four-star Anemo Claymore user packs a punch. With each Swirl effect she produces, your team will be slightly healed. Sayu can also heal your team based on the damage from her Elemental Burst. If you want more powerful healing, then you need to increase Sayu’s overall damage.

How to get Skyward Pride and Prototype Archaic in Genshin Impact

The five-star weapon, Skyward Pride, is her ideal weapon. Every use of her Elemental Burst will increase her attack by eight percent. Skyward Blade also enhances Energy Recharge, meaning more frequent Elemental Bursts.

You can only obtain the Skyward Pride on the Standard Banner or the Weapon Banner. Occasionally, the Skyward Pride will be a boosted weapon on the Event Weapon banner, but this has only occurred twice since Genshin Impact launched

If you have trouble obtaining a five-star weapon like Skyward Pride, Prototype Archaic will also perform well for Sayu. You can craft it at any forge found in Liyue Harbor or Mondstadt. Here’s what you’ll need:

Those items are rather easy to find if you know where to search.

When using the Prototype Archaic, Normal and Charged Attacks have a 50 percent chance to deal an additional 240 percent attack damage to enemies within a small AoE. You can use the effect once every 15 seconds. It also boasts a substat that enhances the wielder's attack. As you enhance the item, Sayu’s attack will be increased greatly, strengthening your healing.

Viridescent Venerer is Sayu’s best artifact since it significantly improves her Anemo damage, and thus improves what she can do. If you can equip her with two pieces, she'll gain a 15 percent damage buff to all Anemo damage. Once you equip her with two more pieces, Sayu's Swirl damage will be boosted by 60 percent, and any foe caught in the Swirl will have their elemental resistance reduced by 40 percent for 10 seconds.