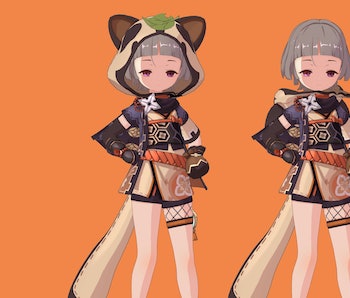 You need to call your local cartographer. Genshin Impact leaks suggest that the game’s biggest update ever is imminent. You’ll be transported to Inazuma, a brand new region with characters that are just as new. The roster expansion includes Sayu, the Anemo four-star character. She’s a Tanuki-themed ninja and a powerful ally.

Given that Sayu is just a four-star, she’ll be simple to obtain once the update comes out. Why wait until the update to get ready for her? Using information from the data mining site, Honey Impact, you can start farming items for Sayu’s Ascensions and Talents right now.

So here are five essential items to farm for Sayu.

What are Sayu's upgrade items in Genshin Impact?

Several of these items might seem alien. That’s because they’re only available in the upcoming Inazuma region.

It’s unknown how exactly you’ll be able to farm those items once the update launches, but here’s how you can get the job started by stocking up on everything else.

A Crown of Insight is required to max out every single late-level talent in Genshin Impact. Of course, that includes Sayu. Alas, you cannot farm the Crown of Insight at a controlled pace. It's primarily acquired through events at a rate of around one Crown per event.

If you can’t wait for another event, you can also nab a Crown of Insight by upgrading the Frostbearing Tree in Dragonspine to level 11.

How can you farm Nectar in Genshin Impact?

There's no singular location in Teyvat that you can attend for all your Whopperflower needs. However, you can pinpoint a nearby Whopperflower using your Adventure's Handbook, by selecting the creature as a tracking target.

Where can you farm a Gilded Scale in Genshin Impact?

You can farm this by defeating Azhdaha, a new weekly boss that joined Genshin Impact in version 1.5.

This quest only becomes available after completing Act 2 of Zhongli’s story quest. After that, you’ll be to find the Azhdaha by the Dragon-Queller tree in his very own trounce domain.

Where can you farm Vayuda Turquoise and Maguu Kishin in Genshin Impact?

Sayu is an Anemo character, meaning Vayuda Turquoise is needed for her Ascensions. You can farm them by defeating Anemo Hypostasises in Mondstadt. Vayuda Turquoise can also be purchased in small sums from souvenir shops in Liyue and Mondstadt. Kazuha requires one sliver, nine fragments, nine chunks, and six gemstones.

In addition to the Vayuda Turquoise, Kazuha needs Maguu Kishin for their Ascension. You can obtain the item by playing through the currently available archipelago event and defeating the Maguu Kenki enemy. When the area is removed after version 1.6, you’ll likely be able to challenge the Maguu Kenki somewhere in Inazuma. The exact location is currently unknown.