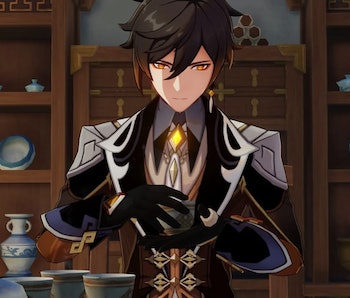 Nearly everyone currently agrees that Venti is Genshin Impact's best character. Zhongli's arrival to the free-to-play RPG's roster just might change that. Even before equipping a single thing, Zhongli has incredible abilities at his disposal. With the right tools, you can somehow improve Zhongli's Geo abilities further, making him potentially the greatest character in Genshin Impact yet.

Here's everything you need to make Zhongli your team's ace character.

Zhongli is a DPS Geo Polearm user. He can rapidly attack foes with physical damage using his Polearm. His Elemental Skill allows him to summon Geo constructs that can block enemy attacks, attack foes, and create shields for your party. Zhongli's constructs can also synergize with other Geo constructs, causing things like Ningguang's barrier to deal damage. Finally, Zhongli's Elemental Burst calls forth a meteor that petrifies enemies while dealing massive damage.

While considering every skill in Zhongli's arsenal, you can go two possible routes with his build. Your first option is to focus on enhancing Zhongli's physical abilities. If Zhongli deals more damage, he becomes a better asset to the team as a whole. Your second option is to focus solely on his Geo abilities, making him the center of a Geo themed party that includes the Traveller, Ningguang, and Noelle.

The difference between these two builds is in the artifacts equipped to Zhongli. A damage driven build requires the Gladiator's Finale set. If you're going to be more Geo-centric, you'll need the Archaic Petra set.

When it comes to Zhongli's weaponry, you'll want either the Crescent Pike or Primordial Jade Winged-Spear. If you're not running a Geo team, Zhongli can fit in perfectly with any party.

To polish Zhongli to his best you're going to want:

How do you obtain Gladiator's Finale or Archaic Petra artifacts?

Archaic Petra boosts all Geo damage by 15 percent at two pieces. If you can collect four pieces, Zhongli will provide a 35 percent damage boost to all party members upon creating a Crystallize reaction. For Geo teams, this set is a massive boon, making Zhongli the essential star of your party.

You can acquire Archaic Petra by completing the Domain of Guyun domain, found in Liyue's Guyun Stone Forest.

How do you obtain the Crescent Pike or Primordial Jade Winged-Spear weapons?

Ideally, Zhongli would be equipped with the Primordial Jade Winged-Spear. Even without refinement, it has a great effect. "On hit, increases ATK by 3.2 percent for 6 seconds. Max 7 stacks. This effect can only occur once every 0.3 seconds. While in possession of the maximum possible stacks, DMG dealt is increased by 12 percent."

This means that Zhongli grows significantly in power with every single attack. Unfortunately, Primordial Jade Winged-Spear is a five-star item that can only be obtained through gacha, making it ideal in the same way winning a million-dollar cash prize is ideal. We'd all love to have the best, but we need to settle for what's realistic.

That's where the Crescent Pike comes in. It's a craftable weapon that boosts Zhongli's attack by 20 percent after picking up an Elemental Orb. Due to being forged and not found via gacha, the Crescent Pike is rather easy to refine. When completely maxed out, the damage boost raises to 40 percent.

With everything listed in your arsenal, your Zhongli will be unstoppable.