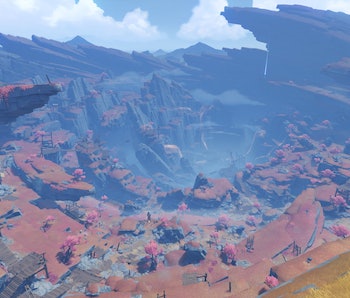 There are lots of quests to conquer in the Chasm region of Genshin Impact. But in your haste to head down into the dark and dangerous mines, you might have missed one of the most rewarding adventures on the surface.

The Genshin Impact Millennial Mountains quest asks you to locate six offerings scattered throughout the Chasm. It’s a great introduction to the upper area of the region and a chance grab some loot.

To get these offerings you’ll have to complete quests, solve puzzles, and climb to the highest point of the crater, before bringing them all back to the altar for some hard-earned rewards. In this Millenial Mountains offerings guide, we’ll help you locate each one, and explain what you have to do once you get to its location.

Here we'll go through each of the offerings, and where you can find them in The Chasm.

This first one is pretty simple. Climb up to the south from the offerings altar. Keep climbing until you reach the highest point and you'll find the spear resting near a wooden stake.

2. The Helm of Warding location

Slightly more complicated, but head to the large mining warehouse near that hole that leads into the Chasm itself. Climb onto the roof to find a way inside, and descend through the building until you reach a room with some explosive barrels and hay bales. Detonate the barrels to reveal a hidden compartment in the floor with the helm inside.

At this point, you'll have to open the door and fight a Treasure Hoarder boss, but he's a pushover.

3. The Cup of Commons location

Once the quest is over, a chest will appear in the final camp containing the Cup of Commons.

Another easy one. Just head to the clifftop location below, marked with a wooden stake, and search the bird's nest that you'll find there. You'll know you're at the right one because Paimon will start talking about it getting windy.

5. The Sundial of Ages location

Near the entrance to the new Lost Valley domain and the large Geo constructs, you'll find an altar on a raised bit of rock. The Sundial is resting in the bowl on the table.

6. The Flower of Farsight location

This one takes a bit of effort to get to, as it's at the highest point of the Chasm. You can get here by heading to the base of the slope near the Statue of the Seven, and climbing your way up.

When you get to the top, you'll find three flowers and an NPC nearby. Pick them all to get the Flower of Farsight, and trigger the NPCs quest. If you decide to follow it, you can get yourself a few chests for your trouble.

Once you have all six offerings, head to the altar, talk to the NPC, and place them to unlock the treasure room in the hole to the left of it. Inside you'll find a full set of Tenacity of the Millelith artifacts and a precious chest. Head back outside and tell the NPC what you found to complete the quest and get those primogems.

And that’s our Millenial Mountains quest guide. We hope you have fun exploring the Chasm!

This article was originally published on April 5, 2022