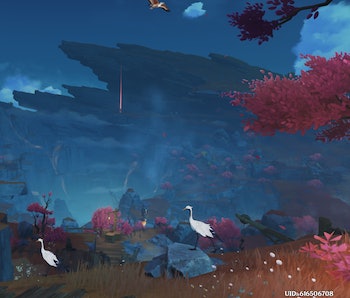 Genshin Impact’s Lost Valley Domain is turning heads, if only because it’s not as intuitive to find as one would expect. At the beginning of the game, it’s easy enough to just run up to the blue domain icons on the map and expect to find the doors waiting there. However, more and more of them involve completing a prerequisite quest or solving a puzzle. In the case of Genshin Impact version 2.6, it’s the latter. Be sure to update the launcher so that you can jump into this new area with the rest of the super fans. Here’s how to unlock the Lost Valley domain in Genshin Impact.

What is the Lost Valley Domain?

The Lost Valley is a new domain that features these two 5-star artifact sets:

The Genshin Impact community is still experimenting with these sets. At the moment, they seem to cater more toward specific characters rather than benefiting enough of them to shift the meta. For example, Xiao could benefit from the Nascent Light effect that a four-piece Vermillion Hereafter set offers because of how he loses HP after his Elemental Burst. However, the community at large doesn’t seem to have a strong recommendation about who else it could benefit.

Other artifacts can also adequately support Xiao and other characters without players needing to touch the Lost Valley Domain. Still, it’s worth unlocking for the Primo pocket change.

Where is the Lost Valley Domain?

The Lost Valley Domain is in the lower-left corner of Liyue at The Chasm’s surface. It’s marked with the blue arrow on the map below. Don’t go just yet, though.

First, add a Geo character capable of creating a construct to your team. That means Geo Traveler, Zhongli, or Ningguang. You need their Elemental Skill to solve the Lost Valley Domain Geo puzzle. Teleport to the closest Statue of Seven in Liyue in case you need to swap elements from Anemo or Electro for Geo Traveler.

After you have an eligible Geo character, head toward the blue arrow. The path to the Lost Valley isn’t as simple as dropping above the blue square icon. You need to start farther away, as most of the path is hidden beneath the rocks behind a stone door with a Geo icon.

As you approach the area, Paimon will comment on a large Geo rock that is brimming with golden energy. The Chasm area includes many Geo puzzles that require breaking open Geo energy constructs and smacking rocks with swords to get them to resonate with each other. That’s what we’ll need to do for the Lost Valley.

The door to the Lost Valley Domain has an orange elemental symbol on it and should be in the area marked with a blue arrow. In the same area are two Hilichurls are dancing around a chest. Defeat them to claim the treasure and remove the chest, exposing the platform. In case you accidentally cleared this area already, the two torches should also work as a landmark.

How to Unlock the Lost Valley Domain

The platform lights up when someone stands on it and stops when they get off. You need it to stay lit so that it can resonate with the Geo rock that Paimon mentioned. If you hit the rock as is, the Geo energy won’t travel far enough to break the door open. That’s where the Geo constructs come in.

Stand in front (not on top of) the platform before using an Elemental Skill to drop a Geo construct onto the platform. This should keep it activated long enough to unlock the Lost Valley Domain. A path of air rings should appear behind you, leading back to the giant stone that’s resonating with the others around it. There should also be a chest waiting on top of the stone.

Take the air path to the stone, claim the treasure, and smack it with your sword to activate its resonance. The hit should cause a wave of Geo energy to break open the sealed door to the Lost Valley domain. The entrance should still be obvious, thanks to a stone tablet in front of it. Just follow the path inside to come to a red-lit domain door and enter.

What’s in the Lost Valley Domain?

The Lost Valley Domain mainly features Ruin Monsters that take extra damage whenever characters use an elemental skill. At the highest level, it houses a beefier version of a Ruin Guard that looks like the Iron Giant, which is the toughest thing to kill in comparison to its wimpy side bosses. It doesn’t seem like farming here will be too crazy, but it’s debatable how necessary it’ll be.