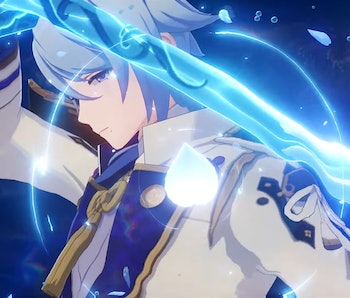 There’s no denying it. Genshin Impact version 2.6 looks stacked. This time, HoYoverse is rolling out a major event in the form of a festival, where visitors from Mondstadt and Liyue will converge in Inazuma. Not only that, but this Genshin Impact update will introduce The Chasm, a long-awaited new region lurking beneath Liyue, and a new Archon Quest to go along with it. Some players will also be eager to pull for Kamisato Ayato, the new five-star character coming to the game. Naturally, fans will relish the opportunity to get a first look with as little hassle as possible.

Here’s everything you should know to prepare for the Genshin Impact version 2.6 update.

When is the Genshin Impact version 2.6 release time?

What are the Genshin Impact version 2.6 maintenance rewards?

Players above Adventure Rank 5 will receive 300 Primogems for their patience. That’s roughly 60 Primogems per hour that the game is unavailable, though compensation is the same even if the update finishes early. Even if you don’t play Genshin Impact often, it’s worth logging in to just snag the free gems, but there’s no rush since you have 30 days to claim them!

Can you pre-load the Genshin Impact version 2.6 update?

HoYoverse announced pre-installation options for Genshin Impact 2.6 just today. The developer regularly posts these pre-loads before maintenance so that players can download the update faster. Here’s how to save some wait time on the update once maintenance ends.

Pre-loading Genshin Impact for PC means downloading the updated launcher from the Genshin Impact official website. Click Download in the upper right corner of the Windows icon to update the launcher, and then open it on your computer. The launcher should come with a “Game Pre-Installation” cloud icon to the left of the Launch button.

As for when Genshin Impact version 2.6 is actually live, downloading it for iOS is as easy as going to the App Store and checking for available updates. Scroll down the list until you see Genshin Impact and click the “Update” button. If you can’t be bothered to scroll through a long list, just search for the app and you should see the Update button beside it after maintenance ends.

Meanwhile, Android players can do the same on Google Play. Check the list of available updates, or just search the game and click “Update.” When it’s ready, players should be able to open the game and follow the instructions from there.

Preload on PS4 and PS5

Genshin Impact doesn’t have pre-load options for the PlayStation 4 or PlayStation 5. You have to wait until after maintenance and then highlight the game using the OPTIONS button. After maintenance ends, you should be able to select “Search for Update” to download version 2.6.

What Genshin Impact events can I do in the meantime?

The Genshin Impact “When They Bloom” web event is going on right now! You can watch Ayato drink bubble tea and help him tend to a little bonzai on his desk.

More like this
Gaming
6 hours ago
How to Get the Scholarly Lisa Skin For Free in Genshin Impact
By Jess Reyes
Gaming
Feb. 6, 2023
Every Reward You Can Get From Your Animal Buddies in Fire Emblem Engage
By Samuel Tolbert
Gaming
Jan. 29, 2023
Genshin Impact version 3.5 is on the horizon — here’s what to expect
By Jess Reyes
LEARN SOMETHING NEW EVERY DAY.
Related Tags
Share: