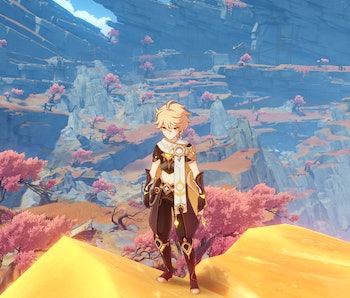 Genshin Impact players are eager to explore the Chasm, the latest area introduced in the version 2.6 update. Official sources (and leakers) have been teasing the area for weeks along with the new five-star character, Kamisato Ayato. Those who want to pull on the latest banner will want to head to the mines to earn Primogems from the related quests and chests. However, it isn’t as simple as just jumping in. Here’s what you need to do to enter the Chasm.

What are the prerequisites for the Chasm?

The Chasm has always been in Liyue, just canonically closed off until the Genshin Impact 2.6 update. Complete these prerequisites to enter the area around the Chasm:

“A New Star Approaches” is the final chapter of the Liyue arc, where the Traveller helps save the country from imminent destruction. These events are referenced when allowing the Traveller into the area, so it makes sense that the player would need to pass this point.

Once you meet the requirements, talk to the two guards in front of the Chasm to enter the area. They will advise you to speak with Muning, the minister who oversees the area. See the map above for where to find the two guards and the entrance to the Chasm.

Note that these steps will let you enter the area above the Chasm, but not actually delve into the mines. You need to complete the World Quest “Surreptitious Seven-Star Seal Sundering” before you can continue below into the actual Chasm.

Muning tells you that you absolutely shouldn’t undo the Seven-Star Seal on the Chasm and that you shouldn’t seek out Adventurer Zhiqiong to lead you into the mines. Naturally, that means you actually should find Zhiqiong, who will instruct you on how to break the seal.

The Geograna, spirits embued with Geo energy, are needed to complete the quest. You need to break them out of brown, jagged ores using a Claymore or Geo Damage. The Geograna should follow you for a short time after you break them out and will automatically light up any structure that they can help with, like any empty Geo-resonating mechanism in the area or Geo lamp, as you pass them.

In this case, lighting “formations” related to the Seven-Star Seal is especially important. The Geograna can fit into the floating rocks surrounding the Bedrock Keys, a.k.a. the structures holding up the seal that you need to break. Once you lead a Geograna into one of these formations, hit it with a Claymore or Geo Damage to down the nearby Bedrock Keys. It might not seem obvious at first, as Zhiqiong merely tells you to hit the formations. However, you should notice your aim affects the direction you shoot a Geo energy beam.

You can find the Bedrock Keys marked across the map with blue square markers. Use the Geograna and Geo formations to break the seal before reporting back to Zhiqiong, who will ask you to talk to Muning about the broken seal before heading into the Chasm.

How to Unlock Archon Quest “Requiem of the Opening Depths”

The Genshin Impact 2.6 update includes a new Archon Quest, Chapter II: Act IV “Requiem of the Opening Depths.” It takes place after the unveiling of the Chasm and the other Archon Quests prior to it. Chapter II: Act III is the end of the Inazuma arc, so it is the latest chapter in the story.

These are the prerequisites for the latest Archon Quest related to the Chasm:

After completing these quests, go back to talk to Katheryne in Liyue. She’ll let you know about a commission from a miner about Hilichurls mysteriously disappearing into the Chasm’s depths. The quest markers will lead you to the commissioner from there.