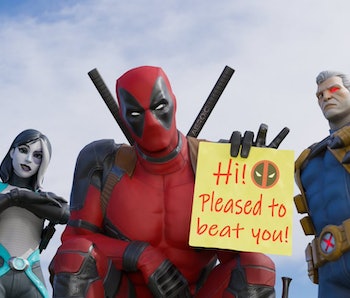 The X-Men crossover that Deadpool started at the beginning of Fortnite Chapter 2 will soon expand to feature the full X-Force team, new leaks suggest. While Epic Games made the decision this week to delay Season 3 of Fortnite Chapter 2 until June 2020, a data mine has revealed that skins based on the X-Men characters that make up the team X-Force are in store for the free to play battle royale game.

Fortnite's 12.40 update was released by Epic Games on Wednesday, and data-miner Lucas7yoshi combed through the game's code and discovered an X-Force costume bundle featuring the likes of Cable, Psylocke, and Domino. An ongoing Deadpool crossover has been running since the start of Season 2, and now his closest allies from the X-Force are seemingly joining the fray.

Lucas7yoshi's tweet revealing the costumes confirms that they will be sold as a bundle. That means they may not be sold individually, at least at first. The leak did not contain any specific release date information for this expanded crossover, but the X-Force celebration should begin in Fortnite relatively soon if the assets were only just added. For the past eight weeks, Deadpool has given players odd challenges to complete to gain certain rewards, and next week's reward will be X-Factor themed.

The Week 9 Deadpool challenge requirements have also leaked along with Deadpool's new skin. Once players find Deadpool's pants and shorts on the game's map, they will unlock an X-Factor Deadpool outfit. Just like in the comics, Deadpool's X-Factor suit is similar in design but is white and black instead of red and black. While we don't know how soon Cable, Domino, and Psylocke will be added to the game, the groundwork for their upcoming appearance will be laid out next week.

While this X-Force crossover starting with Deadpool is exciting, it isn't Fortnite's first rodeo with comic book characters. Around the release of Avengers: Infinity War and then again for Avengers: Endgame, Epic Games added Thanos to the game in a special mode where players tried to get the Infinity Gauntlet. Even this year, Fortnite crossed over with Harley Quinn: Birds of Prey and added skins of that DC character to the game.

The Inverse Analysis — After Epic Games delayed the launch of Season 3 in Fortnite Chapter 2, adding new costumes like this seems like a fun way to fill the void. Players will still have new things to work towards and spend V-bucks on, even if they aren't into the sweeping map and lore changes that come with every new season of Fortnite. It remains to be seen whether this crossover will go any deeper than costumes or if it's setting the stage for an interesting development in Season 3 or even some kind of bonus limited-time game mode.

For X-Men, Deadpool, and Fortnite fans, this is an exciting crossover that further establishes a strong relationship between Marvel and Epic Games. It could eventually expand to other X-Men characters in the future. Disney has been more open to including X-Men and X-Force characters in games like Fortnite and Marvel Ultimate Alliance 3: The Black Order, so it seems more and more possible that we might one day soon see the likes of Wolverine or Jean Grey in Fortnite.