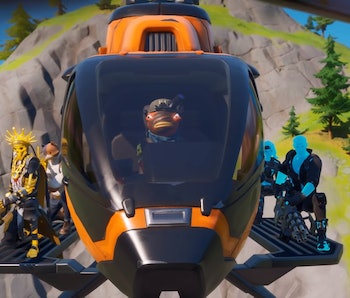 Fortnite's 12.20 update arrived Tuesday and brought plenty of exciting changes to Chapter 2, Season 2, chief among them the helicopters that were teased by Epic Games over a month ago. Anyone who's been enjoying helicopters in Call of Duty: Warzone might be thrilled to find out that Fortnite just got "Choppas."

After some scheduled downtime, Fortnite re-emerged Tuesday morning with a slew of bug fixes, the Spy Games LTM, and the brand-new vehicle called: the "Choppa". The Choppa can support up to five players and gives a welcome new transportation option months into Fortnite Chapter 2. Revealed in a funny new video featuring Deadpool, players can see the new vehicle in action.

The addition of the Choppa isn't much of a surprise as it has been teased since even before Season 2 of Fortnite Chapter 2 when Epic Games was sharing teaser images that included a helipad. While it was featured in the images and helipads were even present on the reworked map when Season 2 began, this new vehicle was still missing. That is no longer the case after update 12.20.

While the Choppa is this update's most notable addition, it isn't the only one. A new limited-time mode called Spy Games has also been added. On the surface level, this mode functions like operation matches where players must get intel. All intel collected allows players to unlock new tech perks from either Ghost or Shadow. More perks will be added over time, and players will be able to switch allegiances to try either side's perks at any time if they want to. Epic Games released a short video showing off how the complicated mode functions. (Watch that below.)

Finally, this update comes with a plethora of bug fixes. In the battle royale mode, this means glitches preventing a return to the lobby, placing markers too far away, trapping players inside porta-potties, and preventing players from auto sprinting and placing traps have all been addressed. Creative and Save the World also got some needed bug fixes, and you can see what those are on the official Trello board for Fortnite. When it comes to balancing, both the Grappler and C4 have been nerfed with increased delays in order to prevent players from spamming.

While the parallels are likely unintentional, it's funny to see a helicopter added to Fortnite: Battle Royale and a mode that focuses on perks shortly after the release of Call of Duty: Warzone. Activision's new free-to-play battle royale game has found massive success since its early March release, and it has already amassed over 15 million players. Fortnite needs to rekindle excitement for its player base in order to remain the top dog.

Interesting updates like this help, especially when they are evoking Call of Duty: Warzone. We saw Epic Games' battle royale juggernaut adapt in 2019 after the successful launch of EA's Apex Legends, so don't be surprised to see history repeat itself if Fortnite starts to incorporate more elements from Call of Duty: Warzone.