"Welcome to Warzone – a massive new combat experience where up to 150 players take the role of a veteran Tier 1 Operator and drop in to the dense and sprawling world of Verdansk." 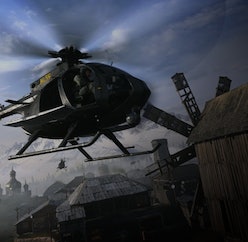 Hot off the tail of a detailed gameplay leak, Activision officially unveiled Call of Duty: Warzone, a free-to-play standalone battle royale game, with a launch trailer confirming the release date and time.

Activision released the Warzone launch trailer Monday afternoon, just a few short hours after YouTuber Chaos leaked a video of their gameplay impressions, perhaps forcing Activision's hand before what may have otherwise been a surprise Tuesday launch.

The trailer shows off Call of Duty: Warzone in thrilling ways, showcasing the many vehicles and sprawling scale of the 150-player matches. These matches will be on a much larger scale than most battle royale titles, and this trailer does a great job at showing that off. The map seems huge with varied terrains allowing for all sorts of different playstyles. It also looks totally overwhelming in the best way possible. According to the trailer, this'll be "bigger, crazier, and free-er."

Call of Duty: Warzone is a battle royale game set on a large island that we now know is called Verdansk. There are two modes, including a cash-focused Plunder mode, and tons of vehicles like helicopters for players to traverse the expansive area. It greatly resembles Call of Duty: Black Ops 4's Blackout battle royale mode in obvious ways, but the game injects some flair that feels uniquely Modern Warfare.

Call of Duty: Warzone will also be available as a standalone game, and those players will be getting access later in the day at 3 p.m. Eastern. They'll also have to deal with a massive 80-100 GB download that rivals the size of Call of Duty: Modern Warfare and even the upcoming Final Fantasy VII Remake.

Even after all of the leaks, the official reveal of Call of Duty: Warzone feels impressive. It's an ambitious battle royale game that's literally the largest ever. The massive file size for those who don't own the original feels a bit overwhelming, but a lot of that probably comes from the quality of the graphics. Warzone should find a lot of success among battle royale fans who still play a lot of Apex Legends and prefer a more realistic battle royale experience when compared to Fortnite.

That being said, Battlefield V's own battle royale mode was pretty underwhelming at launch, so this isn't a surefire hit. We'll just have to wait and see how Warzone performs over the next week and beyond. Who knows what kind of launch week woes might plague Warzone over its first few days?