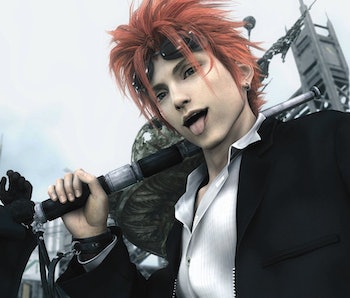 After destroying the second Mako reactor in Final Fantasy VII Remake, Cloud gets separated from his Avalanche pals. He returns to Sector 7 to find the slums are under siege by Shinra agents, including Reno and Rude. Here’s how to evade the Turks in their helicopter, and how to approach the inevitable boss fight.

How to escape the helicopter

Cloud will eventually run into Renomanning an attack helicopter as he scales the main pillar of the Sector 7 plate. He’ll fire at you whenever the chance arises. Stick closer to the center and areas reinforced by nearby plates. Both should provide cover from Reno’s assault. To progress further, keep heading up the tower. Until you reach the roof, there will always be a path upward, even if it appears futile.

While you’re heading up, make sure to have Fire and Lightning Materia equipped, which should be able to target all weaknesses that you’ll encounter. Use Fire on humanoid foes like Elite Riot Troopers and Helitroopers, and lightning on mechanical foes like Sentry Guns and Slug-Rays.

You’ll eventually see Jessie for a cutscene, and the helicopter will be out of commission. Follow the narrow path on your right to continue. Veer left a little for a vending machine and a bench to recover. Now you’re about to face the Turks again, but on land. Make sure you have the right Materia to fight Reno and Rude.

Best equipment and Materia for Reno and Rude

The upcoming bosses will be vulnerable to Poison, Wind, and Sleep. You can link either of the first two to the Elemental Materia for extra damage.

Alternatively, you can pair Lightning + Elemental on your armor to avoid damage. This can work well for a setup with Barrett as your healer. Additionally, give Barret a Cure Materia linked with Magnify. If available, equip Deadly Dodge to either Tifa or Cloud.

Make sure to bring along the Choco-Mog summon for additional wind damage. For good measure, equip somebody with a Steal Materia. (Tifa’s a great option if she has an open slot.)

How to fight Reno

Immediately use Steal on Reno, giving you a free Magician’s Bracelet, which has four Materia Slots and seven defense points in both Physical and Magical Defense.

Since you last met, Reno has picked up some new skills like Flashfoot. He’ll do a Zig-Zag lightning-based attack then slash with his baton. Dodge this as Cloud, leaving Reno wide open. Start off your counterattack with Deadly Dodge, then move into a full-scale attack.

If Reno uses either Beatdown or Flashstrike, switch to Punisher Mode. The stance’s natural counter should stop both techniques in their tracks.

After Reno has taken enough damage, Rude will enter the fray with the Turks’ helicopter. It doesn’t have that much health and will only attack in a very telegraphed straight line pattern. Use this chance to heal up for the second half.

Reno will return for one last strike, casting Pyramid on one of your allies. It’s a barrier that can easily be destroyed with physical damage. Then you can start dealing damage to the helicopter.

Use Barret’s long-range attacks to destroy the chopper. It should crash around 50 percent through its health bar, prompting Rude to leap out. Now you need to face the duo together.

How to fight Reno and Rude together

Use Steal on Rude when he joins the battle to gain a free Heavy-Duty Bracer, which has three Materia slots, 53 Physical Defense and 13 Magical Defense.

Don’t be intimidated by this duo: Rude is kinda weak. Cast Sleep on Rude continuously and attack Reno. Employ the same tactics you used against him earlier and you’ll be golden. Once Reno is gone, Rude can be Staggered by exploiting his vulnerabilities to Wind and Poison.

Then you’ve done it, you’ve bested Reno and Rude. You’re home free! Once you’ve finished the fight, you’ll want to check out our guides for upcoming side quests like Power of Music and Secret Medicine.

Final Fantasy VII Remake is out now for PS4.

More like this
Gaming
12 hours ago
Where to find Fecund Blessings in Genshin Impact for Of Ballad and Brews
By Jess Reyes
Gaming
Oct. 3, 2022
How to find fresh designs to upgrade and decorate your Splatoon 3 locker
By Hayes Madsen
Gaming
Sep. 30, 2022
The best Warzone EM2 loadout for Vanguard Season 5 Reloaded
By Joseph Yaden
Related Tags
Share: