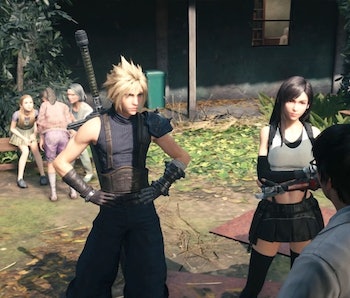 After completing the scene at Aerith's house in Final Fantasy VII Remake's Chapter 14, the world will open you up to tackle an assortment of side quests. You could head over to Sector 6 to complete the Power of Music or amble around Sector 5, where you might meet a doctor who wants you to find a few items as part of a "Secret Medicine" quest. Except it evolves into a

How to find the Secret Medicine Side Quest in FF7 Remake

The doctor who gives out the quest can be found next to Sector 5's bar, which should be denoted by a music sign on your map. If you can't find it, we've got the location for you on a handy map below. But it's the outdoor restaurant where Aerith sometimes helps out at.

1. How to obtain Moogle's Mortar in FF7 Remake

The location should appear as a star on your map. Once you arrive, if you don't have a medal to spare, chat up the child in the corner about playing a Wack-A-Box round. Just participating in the smashing game will grant you a Moogle Medal.

2. How to obtain Medicinal Flowers in FF7 Remake

Medicinal Flowers can be obtained by heading back to the Chruch where you first encountered Aerith in Sector 5. Prior to heading off to do the second task, I suggest picking up the "Corneo's Secret Stash" and "Chocobo Search" Side Quests before heading over, so you can get them out of the way at the same time. Just head to the center of the church to find the flowers you need for the quest.

3. How to obtain a Behemoth Horn in FF7 Remake

Head to Evergreen Park, the area where you and Aerith bonded earlier before heading to Wall Market. Once in the park, look for Wymer, the NPC in a vest and newsboy hat. Speak to him to obtain the quest "Subterranean Menace." Once you do, you'll be free to head down to the labs to challenge the Behemoth that lurks there and claim your horn. Head to the little dome with an opening, located to Wymer's right, and crawl under it to get to the Labs. Unlike when you played through this labyrinth as Barret a few chapters earlier, your goal is now to reach the bottom. Once you do, you'll meet the Type-0 Behemoth.

As the name might imply, this fellow is a toughie. They lack any elemental weaknesses, but you can still stagger by focusing on using offensive character abilities. Target either their upper or lower body first, cripple it, then target the other half. Once both halves have been downed, the boss will collapse. When you have the time, attack its head to stop the Behemoth from being able to counter your spells.

Repeat this process until it's defeated, and you'll be awarded the Horn and be able to turn in the "Subterranean Menace" quest to Wymer and "Secret Medicine" to the doctor.