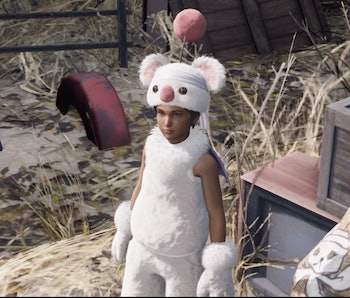 In Final Fantasy VII Remake's opening moments, you're told breaking Shinra crates can yield a reward. Often, you'll recieve basic healing items like Potions, Phoenix Down, or Ethers. You might restore a small bit of MP by discovering Mako Shards. Sometimes a mysterious item called a Moogle Medal will appear. They weren't in the original FF7, and it's not clear what purpose they serve until several chapters into FF7 Remake. Turns out, you can redeem them at a special shop for some exclusive items. Here's how to find that elusive merchant, and what you can get for your trouble.

What are Moogle Medals in FF7 Remake?

When they first appeared in the Final Fantasy VII Remake demo, we thought Moogle Medals were just an Easter egg referencing the Kingdom Hearts series. In the full game, they're actually a currency that can be spent after reaching the Sector 5 Slums in Chapter 8.

Help out the local kids with a bit of monster trouble, and you'll see a youngster dressed as a Moogle within their secret hideout found in the Sector 5 Slums. This is Moggie, and he's the only person in all of Midgar to take Moogle Medals as currency. Redeeming a few of your metals for items will complete the Mysterious Moogle Merchant sidequest.

Unlike Chadley, Moggie doesn't move from place to place along with the party – you can only find him in the childrens' hideout in Sector 5.

What does the Moogle Emporium sell in FF7 Remake?

Despite being run by a kid in a furry costume, the Moogle Emporium a few must-have items, ranging from potions to exclusive enhancers. But what's worth your time? This is their entire inventory.

While a few of these are passible, you should definitely pick up the Steel Pincers, a melee weapon for Barret, the Silver Staff for Aerith, and the Whistlewind Scarf accessory. This handy item boosts your ATB gauge when the battle stars. Try not to miss out on any of the four books, as each will grant one of your party members 10 SP to upgrade all their weapons.

The Moogle's Mortar is needed for a late-game sidequest. The Salvation Badge increases the effectiveness of healing spells when your HP is at 25 percent or below. The Enfeeblement Ring inflicts Toad status on the wearer at the start of battle, for the masochists among us.