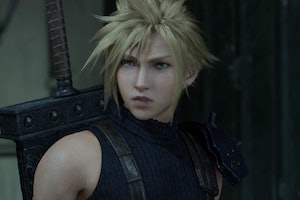 Since first being released in 1997, Square Enix’s Final Fantasy VII has evolved into a franchise unto itself, complete with multiple spin-offs, inside jokes, movies, promotional guest appearances in other media, and now there's a bonafide remake series that's about to kick off. So it makes sense that Final Fantasy VII Remake and its demo, released Monday, would come with several Easter eggs and other secrets for long-time fans to discover that connect to the broader universe.

While smashing Shinra bins in the Mako Reactor, were you confused by something called a Moogle Medal? Do you know why Cloud Strife holds his sword in those specific ways for each of his forms? Here's a look at 5 Easter eggs and secrets from the FF7 Remake demo you might've missed:

Final Fantasy VII characters are a mainstay in the Kingdom Hearts-verse, and the FF7 Remake demo returns the favor with something straight out of KH. Smashing boxes featuring the Shinra logo is a surefire way to restore HP and MP in the new Midgar, but doing so can also yield Moogle Medals, which aren't in the original game.

What these items are used for in FF7 Remake is somewhat unclear so far, but their description reads “a popular item among collectors.” In Kingdom Hearts, Moogle Medals are items that can be sold to shops to quickly earn a handful of the game’s currency. They can be worth a lot of Munny to Sora, but it seems pretty likely that they might serve the same function in FF7 Remake to earn Cloud some gil.

4. The demo has a secret ending

Like all of Tetsuya Nomura’s works, the FFVII Remake demo has a secret ending awarded to players who take on a bit of a challenge.

By choosing 20 minutes when adjusting the bomb’s timer before the boss fight rather than 30 minutes, you’ll unlock a little 15-second scene that appears after the sizzle reel that plays at the end of the demo. For the full implications of that ending, we recommend you read our full explanation of the eerie scene, but it's essentially a brief vision that Cloud experiences flashing back to a suppressed memory.

Final Fantasy has some of the most memorable music in gaming, particularly the victory fanfare post-battle tune that happens at the end of every victory. The original Final Fantasy VII has some of the most hum-worthy and memorable victory tunes of them all. But as battles become seamlessly integrated into the game experience with more minimalistic transitions, the fanfare has dissipated somewhat.

Fortunately, the franchise's most boisterous characters have made it their goal to fill the void with their own voice. In Final Fantasy XV, Prompto would occasionally hum the tune after winning a skirmish. Now, with Prompto gone, that role has gone to Barret. Randomly during the demo, when he and Cloud win a skirmish, he'll murmur, "Duh-duh-duh-duh-duh-duht-DUH-DUH-DAHHH!"

Remember the bevy of Final Fantasy spin-offs? Crisis Core for the PSP functions as a prequel starring Cloud’s friend Zack Fair, the previous owner of the Buster Sword who used to date Aerith.

In the FFVII Remake demo’s first section, you’ll fight two Shinra soldiers near of a turnstile. Before you hope over that turnstile, take a look at the posters on the wall. One of the them will be an advertisement for Banora White apple juice. This is a very obscure reference to the Banora White apples found in Crisis Core’s Banora Village. These trees bear fruit randomly throughout the year, which prompted the locals to call them "dumbapples." (You can't even make this stuff up!)

Cloud has a pretty major identity crisis in the original Final Fantasy VII. Players eventually uncover that his life was defined by two people: Zack Fair and Sephiroth. In Final Fantasy VII Remake, the connection is made immediately apparent in how Cloud carries himself.

Cloud has two battle stances that can be toggled through by pressing triangle, each references a major figure in Cloud’s life. In Operator mode, Cloud strikes swiftly and rapidly as Zack Fair once did. In Punisher Mode, Cloud elevates his blade, directing it downward, similar to Sephiroth’s go-to fighting stance. For the further implications this has on lore, please read our full explainer on the matter.