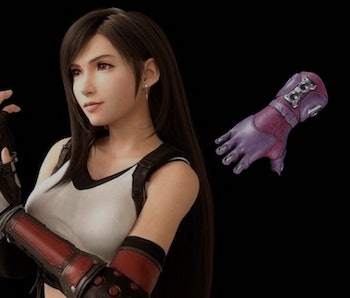 When you’re playing as Tifa in Final Fantasy VII Remake, your goal is to hit things and hit them hard enough to cause the enemy to stagger. That’s why her endgame weapon, the Purple Pain, is such a boon. Using the weapon’s True Strike ability, you can stagger any foe vulnerable to physical damage with ease. You just need to obtain the gauntlets first.

Where to find Tifa’s Purple Pain weapon in FF7 Remake

You can find the Purple Pain while ascending the Shinra HQ in Chapter 16. Shortly after entering the building, you’ll come upon a section while you’re playing as Tifa. She’ll need to swing across some chandeliers to obtain a Shinra Keycard. But midway through her traversal, Tifa slips and falls down to the ground below.

You’ll see a ladder nearby that will bring you back up to your mission when the time comes, but adjacent to that ladder, there’s a set of lights that can double as monkey bars. Take them to reach the next platform. Take one more set of monkey bars to finally reach the Purple Pain, located in a chest with a fittingly purple hue. Now that you’ve got these gloves, how exactly do you use them?

Before we talk about the benefits of the Purple Pain, tell us what you think Mako smells like, right here.

What Ability does Purple Pain give Tifa?

The Purple Pain’s most essential use is access to the True Strike ability. The move greatly increases the stagger percentage on every foe. It’s great if you’re still struggling to finish Chadley’s 200 percent stagger intel mission or facing any post-game challenge like Hard Mode or Bahamut.

The mauve mittens are Tifa’s most balanced weapon in the entire game. When maxed out, they have nearly equal physical and magic attack at 82 and 66, respectively. There are also boosts to HP, Speed, Limit Break damage, and Tifa’s Unbridled Strength ability. While wearing the gloves, you’ll have a 70 percent chance to enter a battle with Tifa automatically at her first level of Unbridled Strength, allowing her to use Omnistrike.

Purple Pain’s weapon map features a slot for Reprieve, an ability allowing any character to survive a fatal blow once per fight. Overall, the Purple Pain is an essential weapon for anyone facing endgame challenges. However, it’s difficult to know where you should get started on the weapon's upgrades when you first obtain it.

What should you unlock from Tifa’s Purple Pain weapon first?

If you lack the AP to unlock everything at once, you should first focus on adding attack, then building out Tifa’s Unbridled Strength, and then claim Reprieve. Everything else can come after that. Purple Pain will feature six Materia slots when fully upgraded, so plan to fill them up. You should also consider giving her a Luck Up Materia to increase the chance of a critical hit, which will pair supremely well with her True Strike attack.