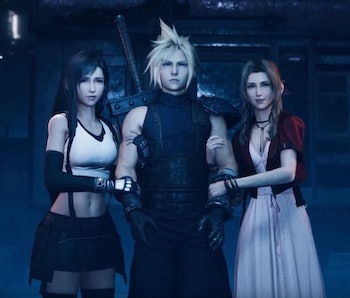 Final Fantasy VII Remake is, at times, more than an action-adventure title where you slice monsters with a massive blade, but an important section in the middle of the game also has to carefully select a dress for each of the main characters to wear. What are your dress options for Cloud, Tifa, and Aerith?

If you're really into fashion, then Final Fantasy VII Remake can feel like the journey to obtain the different dresses that can be worn in Chapter 9 when Cloud, Aerith, and Tifa infiltrate Don Corneo’s mansion in Wall Market. The methods for obtaining each dress aren't immediately clear, and your knowledge from how this sequence plays out in the original can only take you so far.

How to choose the right dress for Tifa

Tifa has three dresses to pick from: Mature, Sporty, and Exotic. To pick between the three, you’ll need to complete all available Side Quests found in Chapter 3. Once they’re completed, a purple marker denoting a discovery event will appear in your Sector 7 apartment. Interact with the marker to begin an event where Cloud talks to Tifa. It'll conclude with you choosing between these three dress variants.

If you missed the Side Quests or simply don’t want to do the extra work, Tifa will wear the Mature dress by default, which is also what she wore to Wall Market in the original Final Fantasy VII. Here are the three dress options to provide you with space to make an informed decision.

How to choose the right dress for Aerith

Unlike Tifa, you’ll never receive an option to choose what dress Aerith will don in Chapter 9. The dress Aerith wears is instead determined by the number of Side Quests completed in Chapter 8, the one where you officially meet her. Dress one is provided by default, dress two is unlocked by completing 3/6 Side Quests, dress three (and the closest one to what she wore in the original Final Fantasy VII) is unlocked by completed all six Side Quests available in Chapter 8. If you’d like to choose between the three, here are images of each.

How to choose the right dress for Cloud

Cloud himself was somehow roped into joining Don Corneo’s dress brigade, becoming a divine drag superstar in the process. Like Aerith, Cloud’s attire is also dependant on your Side Quest selection. He can wear a white dress, a black and blue dress, or a black dress. The black dress is unlocked by default, while the other two attires are obtained by completing specific questlines. Completing one questline will lock the other one.

The white dress will be unlocked by completing the questline beginning with “The Price of Thievery” Side Quest. To unlock it, you’ll need to fulfill a few pre-requisites in Chapter 9. You’re allowed to miss a few of these, just make sure to hit the majority of them.

Alternatively, if you’d like the black and blue dress for Cloud, you’ll need to complete a different questline in Chapter 9, beginning with “The Party Never Stops” Side Quest. To unlock it, complete the following prerequisites. Again, you’re allowed to miss a few of these, but make sure to hit the majority of them.

You’ll unlock either “The Price of Thievery” or “The Party Never Stops” questline after finishing the final bout in “The Underground Colosseum” quest. Alternatively, you can ignore both lists entirely, instead opting for Cloud’s black dress, which is his default look.

If you’re having trouble choosing, here’s how all three attires look

How to obtain all 9 dresses for Cloud, Aerith, and Tifa

To obtain all nine dresses, you’ll need to do a few replays after first beating the whole game. Luckily chapter select will be unlocked afterwards. To use it to claim other dresses, replay Chapter 3 and choose a different outfit for Tifa. Then exit to the main menu. Afterward, skip directly to Chapter 8 to clear Aerith’s requirements and play through the Don Corneo section of Chaoter 9. It’s a bit troublesome, but that’s what it takes to be a Final Fashionista.