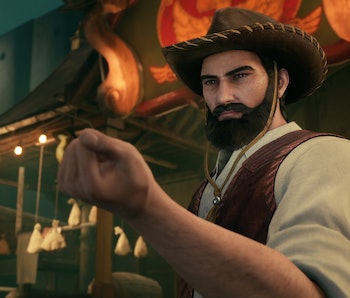 An option that initially seems harmless in Final Fantasy VII Remake actually has a significant impact on how your experience in Wall Market plays out in Chapter 9. Not long after you first step foot in Midgar's lawless district, Chocobo Sam presents you with the option to call heads or tails in a coin toss, and this has a bit of a butterfly effect on the rest of the chapter — including what kind of dress a certain character wears later on.

Cloud and Aerith ask for Chocobo Sam's help in infiltrating Don Corneo's Mansion. He's one of three power players in Wall Market who can approve "auditions" for Don Corneo, along with Madame M and Andrea Rhodea. While the coin toss is technically rigged thanks to a double-sided coin, your response to his prompt matters. No matter what happens, the ensuing cutscene sees Chocobo Sam say that Aerith is not Don Corneo's type, and he suggests you seek help elsewhere.

What you choose influences what side quests become available later in Chapter 9, so the real question here is whether you prefer Chocobo Sam or Madame M.

Heads or Tails: Complete a series of side quests for Chocobo Sam

The cutscene that plays out after you choose heads or tails is mostly the same. Cloud will choose a side of the coin, lose, and find out that the coin is rigged so that Chocobo Sam would always win. After this, he will dismiss Aerith and Cloud and not want to help them. This will send Cloud on a series of side quests where he meets the likes of Madam M and Andrea Rhodea.

All of these quests lead to Cloud cross-dressing to infiltrate Don Corneo's Mansion alongside Aerith to save Tifa, but this coin toss also helps determine which dress Cloud will wear. If you choose heads or tails, Cloud will end up wearing a black and blue dress. While this is the route most players probably, you can get a different series of quests and a different dress by picking the third option.

No deal: Complete Madam M's side quests to get into Corneo's home

If you don't play along with Chocobo Sam's game, Aerith will interfere and make the call. There will still be a coin toss, and Cloud and Aerith will still lose. However, you'll then later receive quests in Chapter 9 from Madam M instead of Chocobo Sam. This also results in Cloud wearing a lavender and white dress more reminiscent of what he wore in the original Final Fantasy VII.

This change is subtle and not all that noticeable on a first playthrough, but it makes Chapter 9 worth replaying once you beat FF7 Remake. Regardless of which of these options you choose, you will get the "Dress to the Nines" trophy on PS4. Cloud isn't the only character with varying dresses in Chapter 9 either, as Tifa and Aerith also have alternate dresses depending on the player's choices at other points in the game.

You'll also be returning to Sector 6 in Chapter 14 while completing several sidequests. If you need help getting through those, utilize our guides on how to find every missing Chocobo, how to find all of Betty's music discs, and where to find all three of Corneo's secret stashes.