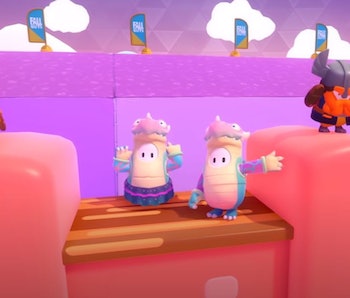 After Fall Guys: Ultimate Knockout took the battle royale world by storm in August, players have been waiting to see what's in store for Season 2 of the game. The second season of Fall Guys is just days away at this point, so we've rounded up everything you'd want to know about when exactly the new season starts, what new levels and other additions it will bring to the game, and what to expect from the remainder of Season 1.

When are the Fall Guys Season 2 start date and release time?

Fall Guys is typically updated during the morning in North America, and Season 2 is no different. An in-game timer confirms that the update will happen at 8 a.m. Eastern.

Originally, Fall Guys Season 2 was supposed to start on October 5, but that got pushed back several days by the developer. That's why you're not seeing the new season's additions just yet and the in-game timer now says the new season is a couple of days away.

What is the Fall Guys Season 2 update file size?

The file size for the new season of Fall Guys is currently unknown as Mediatonic and Devolver Digital have not shared it yet. Unlike each new season of Call of Duty: Modern Warfare, it's hard to say how much space you'll actually need to set aside for the update. We'd guess that this update will be a bit bigger than the game's previous updates.

Considering that Fall Guys doesn't take up that much storage space, this new season shouldn't break your PS4 hard drive. As of now, there is also no way to pre-load the Season 2 update, so you'll just have to wait for it to download before you can start playing.

Season 2 of Fall Guys is medieval-themed, so most of the new levels and costumes within it are themed after knights, witches, and castles.

So far, we've seen two major new levels. Wall Guys has players pushing boxes to get over giant walls, while Knight Fever is an intense medieval-themed platforming gauntlet. Other improvements to UI and customization are also going to get added. Check out Inverse's article everything included in Fall Guys Season 2 to get a better idea of what to expect.

What carries over from Fall Guys Season 1?

If you've put a ton of time into Fall Guys over the course of Season 1, you're probably wondering what carries over into Season 2. Mediatonic has confirmed that any purchased customization items, as well as the Kudos and Crowns that players have earned, will carry over to the next Season.

The only aspects that won't are a player's fame and levels. It's also unlikely that Season 1 costumes will reappear in the shop for some time. Basically, the rewards you get from winning games or microtransactions won't be deleted, while season-specific leveling will be.

That said, getting a leveling reset should give players an excuse to dive into the game all over again. If you want to get as much Season 1 content as possible, players can get double fame points in-game between today and October 8.

More like this
Gaming
37 minutes ago
PS Plus library includes a rad Red Dead DLC and 7 more secret gems
By Joseph Yaden
Gaming
25 minutes ago
New PS Plus games list exposes a major flaw in Sony's Game Pass rival
By Hayes Madsen
Gaming
5.11.2022 8:05 PM
Everything we know about the crab souls-like Another Crab’s Treasure
By Hayes Madsen
Related Tags
Share: