"We're working on the issue ... and plan to release a Hotfix to address it as soon as possible." 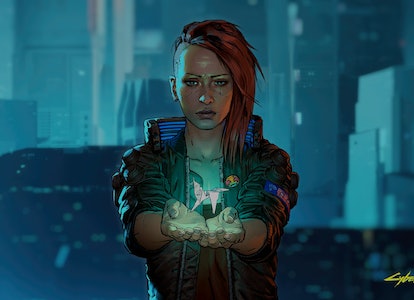 Patch 1.1 was supposed to save Cyberpunk 2077, but it added a game-breaking bug.

Cyberpunk 2077 players were excited ahead of Patch 1.1's launch as it was supposed to be the first post-launch update that would make the game look and run better on consoles. While the update did fix a lot of bugs and improve performance on consoles a little bit, Patch 1.1 wasn't the massive overhaul that players were hoping for.

It even added a glitch that halts your progress entirely, which is utterly game-breaking. The worst Cyberpunk 2077 bug since the save data corruption glitch is still in the game. Thankfully, there is a helpful workaround that will circumvent this story-halting bug until CD Projekt Red eventually patches it out.

Since Patch 1.1, many players have gotten stuck on the main story quest "Down on the Street." Throughout Cyberpunk 2077, most characters communicate with V through a holocall that's directly in the game's UI. In "Down on the Street," Takamura is supposed to call the player to get the quest started. If you have Patch 1.1 installed though, he won't talk after calling.

Because this conversation needs to finish before players can progress, this glitch is game-breaking and will halt your Cyberpunk 2077 adventure until it is fixed. Thankfully, there are some workaround if you don't want to wait for CD Projekt Red's promised hotfix.

How to avoid the Cyberpunk 2077 Patch 1.1 progression bug?

CD Projekt Red has suggestions that can help while we all wait for a hotfix.

There are a couple of different ways to avoid this bug. If you don't want a complicated workaround, your best option is to not update the game. Of course, the downside of doing this is that you won't be able to experience any of the other improvements that Patch 1.1 brought to the game and may run into other glitches or bugs.

If Cyberpunk 2077 is already fully updated on your platform of choice, CD Projekt Red has thankfully revealed a helpful workaround on its support website. Do this, and you'll be able to continue "Down on the Street" as Takamura will actually talk to V:

Players without an earlier save are out of luck. There is also a chance that this workaround doesn't work. Still, players should be relieved to know that is some in-game workaround for this issue before the next major Cyberpunk 2077 update arrives.

"We're working on the issue where the conversation with Takemura may not start during the quest "Down on the Street" for @CyberpunkGame and plan to release a Hotfix to address it as soon as possible," CD Projekt Red tweeted on January 25. Hopefully, the hotfix will arrive sometime this week and we won't have to wait until Patch 1. launches sometime in February.

Cyberpunk 2077 is available now for PC, PS4, Xbox One, and Google Stadia.