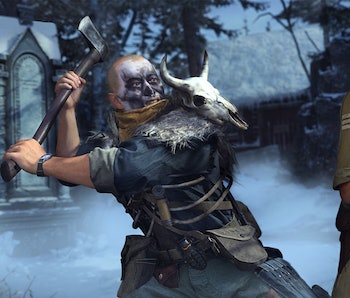 Activision is hosting a one-week free trial for Call of Duty: Vanguard, allowing users to try out the franchise’s latest multiplayer suite without spending a dime. This is great news for those who have been on the fence about the newest COD entry — more so if you’re a Warzone player since the trial allows you to carry over your progress to the standalone battle royale game. But when does the Vanguard trial start, how do you access it, and what does it include? Here’s what you need to know about the Vanguard free trial.

When is the Vanguard free trial start time?

The Call of Duty: Vanguard free trial begins at 1 p.m. Eastern on Wednesday, May 18. So if you’re reading this, it’s already live! It runs until 12 p.m. noon Eastern on Tuesday, May 24. This one-week free trial will be available on PS4, PS5, Xbox One, Xbox Series X|S, and PC.

To access the free trial, head to your platform’s specific digital store and search for “Vanguard free access.” From here, you’ll see a trial version of Call of Duty: Vanguard, which can be downloaded right from the store. Since the trial version only includes the multiplayer component, it will likely take up less room on your hard drive than the full game. On PS5, the entire Vanguard game is over 126 GB, but hopefully, you won’t need as much free space for the trial version.

If you’re on PC, search for “Vanguard” within the Battle.net launcher and you should see a “Play Free” option, allowing you to download the trial.

What are the Vanguard free trial features?

The free trial includes all Vanguard multiplayer content such as the 20+ maps, 10 modes, and the recent seasonal update. You’ll have access to the new Mayhem multiplayer map, along with Arms Race, and the chaotic Ship Haus playlist.

In addition, all your progress made during the trial period will carry over to the full version of Vanguard and Warzone, meaning you won’t have to start from scratch if you pick up either game.

The trial does not include access to the single-player campaign or Zombies modes.

Is Vanguard worth playing?

Call of Duty: Vanguard is...fine. Its multiplayer suite, specifically, is among the weakest entries of the past decade or so, but it’s a fun enough time — especially for free — if you plan on running around, casually, with friends.

Even after Sledgehammer games has addressed many concerns such as the botched spawn points, Vanguard still feels bland, due in part to its World War II theme and uninspired, drab presentation.

However, if you’re a Warzone player, it could be worth your time to download Vanguard’s free trial since it’ll allow you to quickly unlock and level up weapons. A handful of Vanguard weapons feature arduous unlock requirements, such as the Armaguerra 43 SMG, which requires you to earn 10 hipfire kills in a single match 15 times.

You’re certainly able to unlock these weapons within Warzone itself, but matches tend to last a long time, so it’s far easier to meet the requirements in a shorter, 5-minute game on Vanguard, instead. So, even if you don’t intend on enjoying Vanguard at face value, it’s nonetheless a great way to unlock and level up your weapons, which carry over to Warzone.