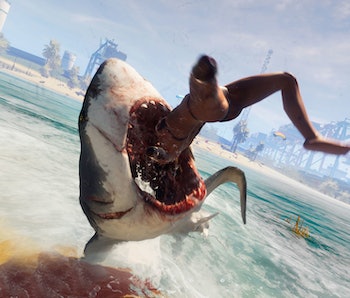 Few creatures on Earth have been as perpetually maligned as the shark. Ever since 1975’s Jaws made us think twice about going into the water, sharks have been seen as this kind of uber predator menace lurking in the deep waiting to maim and dismember us innocent, frolicking humans as we playfully splash in the ocean. Like most conventional narratives, this one is way off course.

Tens of millions of sharks are killed by humans every year, and some populations have declined by as much as 90 percent in recent decades. Despite our slaughtering ways, sharks kill about a dozen of us each year. There are mounds of research showing how sharks are really just curious creatures who use teeth to explore the world (outside of Street Sharks none of them have hands) and aren’t interested in eating us bony land apes. But it’s hard to argue we don’t deserve it. Fortunately for us, sharks aren’t as vengeful as we are. But what if they were? What would happen if we combined a shark’s apex predator skills with humanity’s capacity for wanton violence and destruction?

We’d get a great video game.

Maneater from Tripwire Interactive is one of the most viscerally creative games available on Xbox Game Pass. As the title suggests, you’re out there eating people. But what could quickly become a one-note premise is bolstered by some over-the-top writing and nuanced mechanics that allow players to experience a truly inspired tale of revenge.

Maneater does a lot of things right. The game opens with a detailed tutorial that takes you through the basics. You’re not just swimming and eating, oh no. You can tail whip enemies to stun them, knife the water’s surface with menacing speed and breach high into the air with spectacular vertical leaps. Within just a few minutes you go from munching on turtles to devouring beachgoers and, finally, destroying boatloads of rifle-toting human sharkhunters. It’s the kind of bloody spectacular destruction and wanton violence we love in our favorite summer blockbusters.

This isn’t just an open sea swimming lesson though. There’s a story here, too. You begin the game as a big mama bull shark, but get captured (and killed) by infamous shark hunter Scaly Pete. He cuts a baby shark from mama’s belly, and carves a notch in the baby shark’s fin to mark her and add a bit of thrill to a future hunt. Baby leaves a mark of her own by devouring Scaly Pete’s hand before thrashing her way into the water.

From there a timeless tale of revenge begins. You begin your journey as a baby bull shark but devour your way up the experience point chain to become a mega shark complete with unlockable buffs like bone armor and electric shocks (cause why not?). It’s all told in the style of a reality show, narrated by the inimitable Chris Parnell. It is escapism at its best.

Maneater is not without some drawbacks, and the rough edges begin to show the longer you play. It’s not an epic saga either, you’ll blow through it in about six hours which is what makes it the perfect game for the long holiday weekend. Take a few hours out from grilling and chilling to terrorize beachgoers and teach a nefarious poacher that revenge is a dish best served salty.