"I got sent to the principal's office every week." 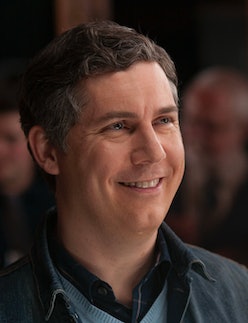 In real life and in the multiverse of Rick and Morty, Chris Parnell is an all-American dad.

Except Parnell is warm and kind, where his character Jerry Smith is bumbling and incompetent.

“I’m on the phone and can’t talk right now, buddy,” Parnell whispers midway through our early May phone call, using the gentle voice that good parents reserve for setting boundaries with their kids.

“That was my six-year-old,” Parnell says, in that way where you can hear the smile. Whether it’s voicing characters like Cyril from Archer or his eight-year tenure on Saturday Night Live, Parnell has leaned into goofy roles his entire career, but Rick and Morty’s Jerry is perhaps goofiest of all.

I was brought up Baptist and a Born Again Christian. I was a “Real Believer,” but I was also just a kid back then. It wasn't a super-strict household, but I grew up in the frickin’ late ‘60s, early ‘70s. That was a long time ago.

In kindergarten, I was a cut-up, and I got in a lot of trouble for talking, trying to make people laugh, and being silly. I don't know how successful I was at making kids laugh, but I know it was something I tried to do a lot.

In second grade, I had a particularly harsh teacher who — not that she was completely wrong either — would keep marks on the board. If you got three marks by the end of the week, you got sent to the principal's office and got a paddling.

I got sent to the principal's office every week but one that school year.

In the second half of ninth grade I transferred to Germantown High School, which thank God I did, because they had this incredible theater program and a TV program just beginning. I definitely found my people there.

I wasn't a particularly “cool” kid. I had lots of buddies, but I wasn't very successful with the ladies and didn't really have girlfriends until high school. Even then, it was very hit or miss.

What was your favorite band when you were 15 years old?

I was very into U2. I don’t know if I was aware of REM at that point but I was about to become aware shortly thereafter. I’m still a U2 fan, but I haven’t picked up any of their albums in the last few years.

Do you remember when U2 forced everyone to download their new album?

That was a weird sociology experiment. By being given this thing for free, I had no desire to listen to it. Which is completely unfair to the band! It was generous of them to give it away for free like that.

What piece of clothing did you wear too often when you were in high school?

I was very into polo shirts and might’ve worn khaki pants too much, which is not the best tone on me, color-wise. I’m more of a winter.

We got an Apple II Plus when I was 11. It was one of the most exciting days of my childhood. My older cousin Carl had one already. He had it set up with his house with this X10 control system to control the lights. This was back in ‘77 or ‘78.

My first awareness of the internet was CompuServ. It was just sort of boards and postings. I have a memory of being very excited when Amazon came along as a way to buy books.

What’s a truth about love that you believed when you were 15?

When I had my first girlfriend around that time, we dated only for about two weeks. We really just hung out in the car and made out. I don't think we actually went on dates. Then I went away to the International Thespian Festival in Muncie, Indiana for a week with my buddy Dan McClary.

I'd given her my class ring and everything, but then I felt like I wanted to flirt with other girls at camp. But I couldn't.

Did you have a high-school teacher you particularly liked and why?

That would be Frank Bluestein, my high school drama teacher.

He became my mentor. He directed all the plays and ran the TV studio. He taught me what good acting was and how to perform. Once I had a breakthrough, he encouraged me to pursue it. “Look, I think you can do this for real, if you want to,” he said. That’s an amazing thing for a 17-year-old kid to hear.

He’s retired from teaching now, but we’re still in touch. I just emailed him this morning! He’s a great guy who’s influenced so many peoples’ lives.

I don’t know where I would be, had I not encountered him.

What do you consider your first professional big break, and why?

I grew up in a suburb of Memphis, in Germantown. I had booked an on-camera Piggly Wiggly commercial that played regionally where I said, “I’m a sacker now, but someday, I’m gonna be manager!” That was my local break.

But my big break was probably Jingle All the Way, my first big movie part. It was an interesting introduction to the business. Seeing Arnold Schwarzenegger holding court, telling stories as this larger-than-life personality. It was cool.

I think we will have discovered more exoplanets. We’ll take a better look at Mars and maybe Venus. We’ll also probably realize we’ll never get to any of these exoplanets unless in 100 years we make some amazing breakthrough like faster-than-light travel.

Unfortunately, sea levels will continue to rise even if we get a handle on global warming. Coastal areas will be threatened or completely submerged, hopefully at a slow pace.

My 15-year-old self would be amazed at how far computer graphics have come. I think he would be amazed that there are grown-up cartoons that so many people are into. Rick and Morty, Archer, and tons of other stuff.

I didn’t watch a ton of TV once I got involved with high school theater, so I don’t know to what extent shows would have been on my radar. It’s so hard to compare that time to now because the internet really didn’t exist anywhere close to the way it does now. He would think this was cool.