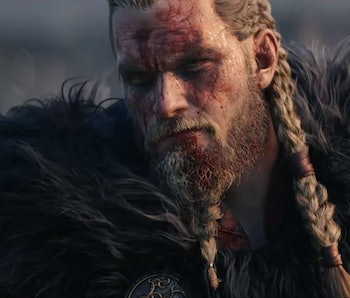 Assassin's Creed Valhalla was officially revealed by Ubisoft Thursday, following up on Wednesday's art livestream tease, and the cinematic trailer makes the new game seem so much bigger than everyone's other favorite Nordic-inspired game, God of War.

The trailer is purely cinematic, so it doesn't show any actual gameplay, but it makes one thing very clear: Assassin's Creed Valhalla is very different from God of War, Sony Santa Monica's 2018 masterpiece for PS4 that people will be quick to compare it to.

The trailer focused on a major battle between the Vikings and Anglo-Saxons. While the latter characterizes the Vikings as faithless, amoral, and bloodthirsty brutes who only want to kill, the video establishes quite the opposite: This is a culture capable of love and tenderness that isn't nearly as savage as the British monarch thinks. The battle itself is brutal, and it ends with one of the Vikings using a hidden blade to kill an enemy that nearly overpowers him — so it becomes clear that this is our protagonist.

The trailer also confirms that Assassin's Creed Valhalla will be released for both current and next-gen platforms (with the exception of Nintendo Switch) in time for the 2020 holiday season.

While the setting and title of this new Assassin's Creed game certainly evoke God of War, there are some major differences that make it distinct. If you adored God of War and are wondering if Assassin's Creed Valhalla is for you, here's how the two titles stack up against each other.

Similarities to God of War — The Nordic setting has become trendy in video games over the past few years, with games like God of War exploring the culture in profound ways. This is the biggest similarity between the two games, as they both pull from the Viking culture and the mythology of Norse gods. The main character in Assassin's Creed Valhalla, Eivor, wields a kind of ax we tend to associate with Vikings — but also Kratos from God of War.

Ubisoft's blog post on the game also hints that Valhalla features a "visceral new combat system that lets you bash, dismember, and decapitate your foes." The trailer didn't show any gameplay, but the cinematic scenes do show visceral action like this. When it launches, Assassin's Creed Valhalla will probably feel just as heavy and satisfying as God of War.

Differences from God of War — While the settings are similar on the surface level, Assassin's Creed Valhalla seems a bit more focused on historical accuracy than the more fantastical God of War. It examines the historical conflict between the Anglo-Saxons and the Vikings, and if Assassin's Creed Odyssey set any kind of precedent, then it will be very respectful to the culture and history that's being represented, even if it dabbles in some minor fantasy elements.

"Odin is on our side!" Eivor shouts at one point in the trailer after seeing a hooded figure near a tree. The Assassin's Creed series hasn't shied away from these kinds of fantastical elements in the past, but as of now, it doesn't seem like the game will grapple directly with mythology, certainly not to the extent that God of War did where you fight actual Norse gods and mythical creatures. Rather, Valhalla will explore actual Viking history.

There are also differences in gameplay: The aforementioned blog post not only teases that the intricate dialogue system from Assassin's Creed Odyssey will return, but that the game also "lets you lead surprise longship attacks to pillage enemy territories for much-needed resources, or launch massive assaults against rival Saxon strongholds." So there's an indication that we might get some light Black Flag sailing elements incorporated as well.

Settlement-building mechanics will also help the game stand out from God of War: "They’ll have to build a new home in the hostile lands of England," the post reads. "There, you’ll provide for yourself and your people by constructing, customizing, and upgrading your settlement with new buildings like barracks, blacksmiths, and tattoo parlors, all while recruiting new members to grow your clan."

The Inverse Analysis — Whereas God of War was a more streamlined narrative on rails that grappled directly with Norse mythology, Assassin's Creed Valhalla looks to examine the Viking culture and explore this tumultuous period in early English history.

I struggle to get into Assassin's Creed games, both old and new, but between the interesting setting, new mechanics, and compelling first Valhalla trailer, I'm intrigued. We may have to wait much longer for God of War 5, but this game seems like it will fill the void until that sequel's release just fine. And for many gamers out there, they might even prefer something like this.

Assassin's Creed Valhalla will be released in time for the 2020 holiday season.