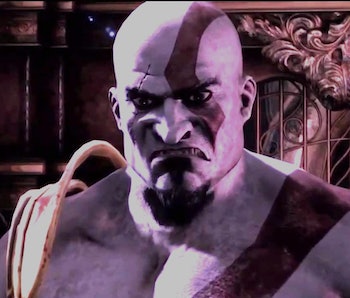 David Jaffe, director of the first two God of War video games, has responded to criticism of the series that came as part of God of War Week, a series of essays published by Inverse which took to task treatment of women in the series.

"I must continually state that Kratos was NEVER a misogynist in GOD OF WAR 1. Like AT ALL. And it pisses me off 'journalists' continue to retcon that game in order to justify the thesis of their GOD OF WAR 2018 stories," Jaffe posted on his Twitter account last week.

Inverse published a series of essays exploring the legacy of Sony's God of War, with articles praising almost every major game in the series while taking a critical look at some aspects of the 15-year-old franchise that introduced the world to Kratos.

The series includes one essay exploring how the original God of War was a direct response to the way "things have become so politically correct" (Jaffe's comments in a 2005 interview), and how the series attempted to evolve with its fans in a celebrated 2018 reboot of the game.

The article by Inverse also includes references to various questionable choices made throughout the God of War series, including an achievement called “Bros Before Hos” that's unlocked by curb-stomping a female enemy in God of War: Ascension. Also mentioned: a puzzle in God of War 3 that requires you to toss a half-naked woman into the jaws of a giant crank, killing her so you can progress to the next level.

Jaffe wasn't involved in either of these games. But our story argues that those spinoffs and sequels weren't reinventing the wheel, but expanding on the premise Jaffe laid out in 2005: a glorious, angry rebuke of PC culture that many gamers loved at the time. Today, many gamers (myself included) look back on it with a mix of nostalgia and regret.

Ahead of the project, Inverse reached out to both Jaffe and God of War (2018) director Cory Barlog for comment, through Sony. We did not receive a reply and also attempted to contact direct Jaffe directly but found him to be unreachable.

However, on March 27, almost a week after the essay in question was published, Jaffe tweeted his vociferous reply.

Later replying to one commenter, he defended one of the game's numerous moments that objectified women at best and came across as misogynistic at worst.

Jaffe has a point. Kratos isn't necessarily a misogynist, at least not in the first God of War game, but the article in question only uses that term to refer to the exact brand of vengeance the protagonist carries out.

In a different reply, Jaffe also publicly disowned some of the franchise's most controversial decisions, which came after he parted ways with the series following God of War 2.

To be clear, we're not publishing this article to fan the flames of conflict. We respect Jaffe's opinion and hope he understands why we stand by ours -- and how it fits into a larger retrospective on one of our favorite video game franchises of all time.

Inverse has offered Jaffe the chance to voice his opinions on this site, and that offer still stands!

Read more about God of War: