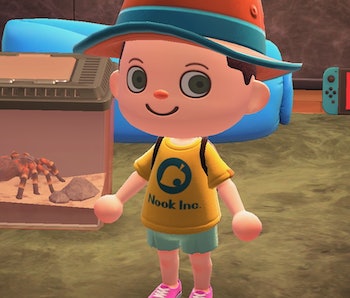 While going about your daily routine in Animal Crossing: New Horizons for Nintendo Switch, you are bound to catch a lot of bugs. You could donate them to the museum or sell them at Nook's Cranny, but that's amateur hour stuff. The real New Horizons pros know those bugs can be sold off to a character named Flick to make some quick Bells. He'll pay 1.5x more than the Nook brothers for your insects.

This is what you have to do in order to find him, sell off your bugs, and even get a cool model of them in return.

1. Wait for Flick to appear

Unlike Kicks, Flick appears in Animal Crossing: New Horizons islands at random intervals for the majority of the year. Flick has a chance to randomly appear on your island in the morning and will wander around for the entire day. He'll disappear after this, so be sure to sell off your bugs when you can.

Flick's a red chameleon with a black leather vest and a spiked, black bug net, so he's pretty hard to miss. He can appear at any location on your island.

While Flick pops up randomly for most of any given year, he is guaranteed to appear during the Annual Bug-Off event. This bug-focused bonanza is run by Flick and gives players a chance to earn points to redeem for rewards by catching as many bugs as possible. If you're a morally grey islander, you could dabble in the occult and use time travel to make it whatever day you wish.

In the Northern Hemisphere, the Bug Off will take place on June 27, July 25, August 22, and September 26. In the Southern Hemisphere, Flick will be guaranteed to appear on November 21, December 19, January 16, and February 20. Once you find flick, start pawning off those bugs!

2. Give Flick your bugs

Once you spot Flick, you'll have the opportunity to sell your most valuable creepy crawlies. The tarantula, one of the most valuable bugs in Animal Crossing: New Horizons, can be sold to Flick for 12,000 Bells, so be sure to start farming them when he appears. The Atlas Moth just arrived to Northern Hemisphere islands in April and is a little less dangerous to tussle with. It can be sold to Flick for a cool 4,500 Bells.

This isn't all Flick can do though.

3. Get bug models from Flick

While Flick isn't a typical vendor like Saharah, there is still one thing you can get from this bug-loving chameleon: bug models. After giving three of the same type of bug to Flick, you can commission a model of that insect or arachnid from him. You can only commission one at a time, but he'll mail it to you the next day.

These statues aren't valuable, but are worth getting if you want to create a bug-themed room or just really like the model of one particular bug in Animal Crossing: New Horizons. Flick doesn't appear very often, so be sure to capitalize on this opportunity when you get the chance.