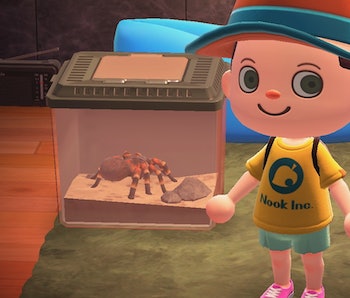 Unless you've already been stung in the eye by a swarm of wasps, your first encounter with a tarantula in Animal Crossing: New Horizons is perhaps the single most frightening experience in the game. You probably saw the arachnid and excitedly pulled out your net only to get bitten by it immediately. This causes your character to faint and wake up back at their tent or house.

They can be a pain to deal with, but tarantulas are also one of the most valuable creatures in the game, so even if you detest them as much as Blathers does, there's a lot you should know about them.

How to catch a tarantula in Animal Crossing: New Horizons

You'll have to wait until nighttime because that's the only period where spiders appear on flat ground. Catching a tarantula in Animal Crossing: New Horizons is a bit more complicated than it may seem at first glance. The simplest way would be to just catch them with a basic net, but this is also the riskiest maneuver because as soon as the spider sees you, it will rush towards you rapidly. If you mess up the timing with your net swing, it will bite you and you'll blackout. Digging holes is the best option, as spiders cannot traverse them.

By creating a series of pitfalls that you can jump over but the spider can't, you can lead it to an area within your range and catch it without much risk. Twitter user @tanerunikki showed the effectiveness of this strategy; meanwhile, @caoki8 found out that if one spider is locked into chasing you and you trap it, the other spiders on your island won't be aggressive. By using these traps and exploits, catching tarantulas should become a whole lot easier for you!

Do you lose anything if a tarantula bites you in Animal Crossing: New Horizons?

If you're headstrong and just try to catch a tarantula more directly, there's a pretty good chance that you will lose. If this happens, your character will be knocked out. While this is definitely an inconvenience, you do not lose any items if you get bit by a tarantula. The only bad thing that will happen to you is that you will be sent back to your (hopefully stylish) home.

This can be frustrating if you're going about your delay routine and desperately want to show Blathers a spider, but it is worth noting that you won't lose anything significant if you get bit by a tarantula in Animal Crossing: New Horizons. But you do lose out on a fantastic economic opportunity to earn a lot of Bells!

How a "Tarantula Island" can earn a lot of Bells in Animal Crossing: New Horizons

Tarantulas are worth 8,000 Bells each, making them one of the most valuable bugs to get in Animal Crossing: New Horizons. You should definitely give Blathers the first tarantula you catch to further his research, but if you want to get a lot of Bells quickly without using glitches, then farming tarantulas is a really good strategy. The best way to do this is to invest in Nook Miles Tickets to visit Mystery Islands at night. These are randomly generated islands where you can find exotic resources, but players are randomly discovering islands with major spider infestations. They call them "Tarantula Islands."

Tarantulas are normally a rare spawn, but if you're playing at night and remove all the trees, rocks, and flowers that you can on the island, it could help increase spawn rates. Once you do this, other kinds of bugs won't appear as often and spiders will spawn more frequently. By using the spider catching strategies listed above, you can quickly catch a lot of tarantulas to sell off.

Just make sure they don't get you first.