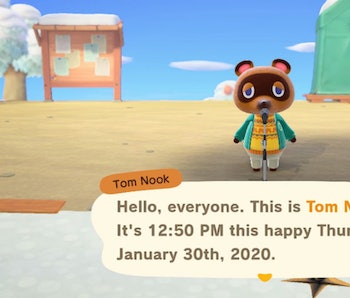 Animal Crossing has always been a fairly relaxed video game franchise where all your achievements happen in real-time, meaning that if the game says a project will be finished "tomorrow," you'll have to actually wait until tomorrow. A day takes a full 24-hour cycle to get through. Because of this, progress can often feel frustratingly languid for certain players. If you're one of those players, Animal Crossing: New Horizons has a hack most players refer to as time travel. This popular strategy is still possible in New Horizons despite the auto-save feature, but there's a catch.

Even in Animal Crossing, time travel is a relative experience. No, you cannot build a time machine out of wood and stone from your tropical island, but it instead refers to the process of changing your console's internal clock to a date in the future so you can artificially progress the game, forcing your plants to grow and buildings to build.

You can experience 20 Animal Crossing days in just 15 seconds using this method, and it's sort of a mainstay of the Animal Crossing franchise that has been around for every title since the GameCube days. Despite pre-launch claims from the New Horizons' director, Aya Kyogoku, that the ability to time travel was removed, players have discovered that it's still easy to pull off. (That didn't take long.)

How to time travel in Animal Crossing: New Horizons

Time travel can be a great boon for earning interest on the money saved within your Nook Stop account. Using it you can make tons of income, fast! But who needs that when you can get unlimited funds with ease? Be wary of leaning on time travel. If you jump ahead too much, the game will read your actions as having neglected this island, causing weeds to grow and certain islanders to depart for better living spaces.

Additionally, you won't be able to enjoy New Horizons holiday events, which require you to be connected to the internet to verify you're experiencing holidays as they happen in real life. According to a recent update on Nintendo's Japanese website, Bunny Day will last from April 1 to April 12. If you don't want to miss it, make sure your system clock is on April 1 when the real April 1 rolls around.

More like this
Gaming
14 hours ago
You need to play Sega's best RPG on Nintendo Switch ASAP
By David Grossman
Gaming
Sep. 29, 2022
Mario Kart 8 and 5 more of the best Nintendo Switch party games
By Jess Reyes
Gaming
Sep. 28, 2022
Wiglett is one of Pokémon Scarlet and Violet's weirdest additions yet
By Hayes Madsen
Related Tags
Share: