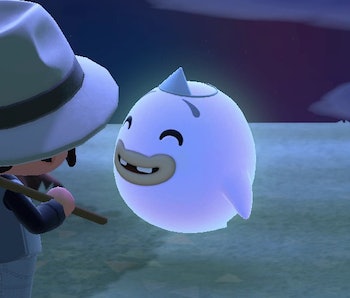 Since the days of the Nintendo GameCube, Animal Crossing players have been haunted by Wisp, the local ghost who roams your world during the wee hours. They're back in New Horizons, and will appear earlier than ever before. This time around, he's got a sidequest he'll need your help with. Meeting your island's incorporeal resident should therefore among your highest priorities, above building new bridges and exploiting the financial system.

In previous Animal Crossing games, Wisp would only show up when your island was covered in weeds. Now, all Wisp needs is the cover of night. It's unclear exactly when the cut-off is for Wisp to appear, but the window seems to be from 8:30 p.m. or slightly earlier through perhaps as late as 4 a.m. It depends entirely on what time your console's clock believes it to be, but the default is to mirror the time in real life. Wisp will show up in forests located near the coast at night. You might need to use your vaulting pole to reach them, but they shouldn't require much else.

Once you and Wisp start conversing, they'll be so overwhelmed with fear the little poltergeist will explode, scattering five pieces of their spirit around the island. Wisp will request that you retrieve their wayward parts, sending you on a quest around the island. If you agree to the quest, they'll reward you with something nice!

How to complete Wisp's sidequest for a reward

After exploding, Wisp's spirit will be just about everywhere. You'll have to check every nook and cranny to locate the wayward souls.

As pictured above, the spirit parts are small, with a similar hue to Wisp's main "body." You can collect them by using your bug net. They're fairly stationary, so once you get close to them, catching the spirit parts shouldn't be too tedious.

Unfortunately, the spirit part locations are random. That means they may appear on areas of your island that are inaccessible with your current toolset. If that happens, all you need to do is leave the area and wait. The parts will eventually float elsewhere – hopefully, somewhere you can reach. Note that while the quest will stay open indefinitely you can only collect the spirit parts at night.

Something new, or something expensive?

After collecting all five pieces, deliver them to Wisp to get a reward. They should still be located in the coastal area where you first met. Wisp will offer you two choices for your reward: something new or something expensive. I suggest you pick something you don't already own, as it's unknown what the 'expensive' item is relative to. If you're in New Horizon's endgame, a 2000 bell item will have a different value to you than somebody just starting out. Why even concern yourself with money when you can earn thousands of bells in just a few short minutes.