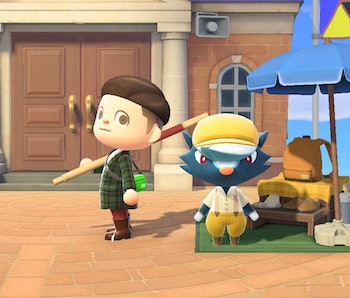 Animal Crossing: New Horizons includes a variety of useful vendors that visit your island every so often. One that's appearing to players in the late-game is Kicks, a skunk who has sold leggings, shoes, bags, socks to Animal Crossing players ever since City Folk. Like other niche sellers, Kicks' sales cycle seems totally random, but there are actually several things you can do to inspire his appearance on your island.

The biggest obstacle between you and Kicks is the milestone of upgrading your island's Resident Services enter. In order for Kicks to even appear on your island, the resident services on your island must be upgraded from a tent into an actual building. Thankfully, this should be achievable within your first week on the island if you haven't unlocked it already.

The first thing you'll have to do is help Tommy and Timmy set up Nook's Cranny. This requires 30 each iron nuggets, wood, softwood, and hardwood. After that, follow Tom Nook's direction and place a bridge as well as three plots of land for new residential homes. After three residents move to your island, Nook will shut down Resident Services for a day so it can undergo renovations, and it'll reappear with upgrades the following day.

This opens up the possibility for Kicks to appear, but it won't happen immediately.

Step 2: Wait for Kicks to appear

Like with Saharah and other randomly appearing NPCs, patience is a virtue when waiting for Kicks.

He doesn't have a set day he'll appear on, but Kicks will start visiting your island once a week and always appear in the town square just like Mabel the blue hedgehog. Unlike Mabel, however, Kicks can't create his own store, so you can always expect him to set up shop in your island's plaza. He may be a bit fickle with his appearances, but Kicks has a few constants that make him a bit easier to track down than other Animal Crossing: New Horizons characters like Saharah or Daisy Mae.

Kicks runs a straightforward shop, so he doesn't have the weird ticket gimmicks of Saharah. That said, he has some items that are worth picking up. Kicks gets his name from the fact that he sells stylish footwear, so go to him if you are directly looking for new leggings, socks, or shoes.

Those items have a chance of appearing in the Able Sisters store as well. His exclusive merch consists of bags and backpacks which typically cost no more than 3000 Bells. Kicks is a humble salesman, but one that can assist you in achieving the specific fashion style that you are looking for.