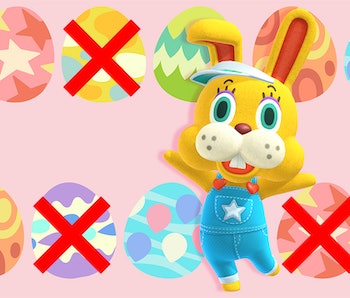 For a seasonal event like Bunny Day to hit Animal Crossing: New Horizons less than two weeks after the game was released seemed really exciting at first, but the egg-filled extravaganza has quickly become frustrating for many players who just want to farm their stones, wood, and fish in peace without the threat of eggs taking up space in their lives.

Fortunately, Nintendo has addressed the most annoying part of Bunny Day in the new 1.1.4 patch.

The main gimmick of Bunny Day has players collecting eggs through various normal activities, but people are fed up with how often a nearly-useless egg will replace a much-needed resource. Nintendo responding by addressing such concerns in a new update that was released Monday.

Animal Crossing: New Horizons 1.1.4 patch notes — The 1.1.4 patch notes are currently only available in Japanese, but they detail a minor glitch fix and a major change to the frequency at which the various Bunny Day egg types spawn.

"During the Easter event, the appearance rate of some eggs has been adjusted until April 11, 2020," the notes read. Conversely, "Eggs are easier to collect on the day of Easter."

In other words, for the next five days, egg spawns have been nerfed, but it's unclear exactly which eggs were adjusted. Players complain the most about Water Eggs caught while fishing, but Polygon estimates that spawn rates for those remain the same while Sky Eggs have seemingly been reduced.

All eggs will still appear in some capacity, so nobody will be completely free of them until April 13.

For anyone who want to know how to find each egg type, check out Inverse's guide that describes each type. We also have a full roundup of every Bunny Day DIY recipe that uses them.

This balancing adjustment for Bunny Day will be undone on April 12 when egg spawns will increase dramatically for the culminating holiday. For anyone looking to craft all of the event-related items before the possibility disappears for almost a full year, this is good news. But for anyone annoyed by Zipper T. Bunny and his Bunny Day event with all the annoying eggs and pretty colors, you might want to avoid playing on April 12 altogether.

Nintendo is treating Animal Crossing: New Horizons like a live-service game — Update 1.1.4 is the third to hit Animal Crossing: New Horizons this month — and it's been less than a full week. On April 2, the game received patch 1.1.2, which addressed many game-breaking bugs that blocked progression. It was then quickly followed up by patch 1.1.3 on April 3 when it was discovered that the balloon would stop spawning after 300 were popped, making it hard for players to claim any more Sky Eggs.

There aren't very many games that Nintendo updates with such frequency, and if the first few weeks of New Horizons is any indication, then we can expect a lot of updates in the coming months on a rolling basis.

The Inverse Analysis — We are still in the game's early days, so it makes sense that a lot of the patches would address bugs or balance issues. Updates should pivot towards more content-focused patches as time goes on and Nintendo prepares for future events like one for Earth Day later in April.

This latest patch proves that Nintendo is listening to player feedback related Animal Crossing: New Horizons and will continue updating the game to ensure it remains a game that players care about.