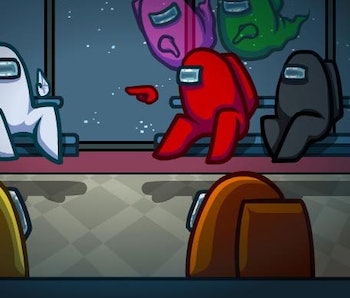 We are still waiting for Among Us' first major update of 2021. While fans wait for the update, new map, and other official changes, the modding community is having a blast creating quirky new modes and roles for the game. The Jester mod in Among Us recently added a bold twist to the game's classic social deduction formula, and now the Snitch mod is making the rounds.

Adding the role of Snitch to Among Us changes the dynamic of the game up as both some Crewmates and the Imposters have new information at their disposal. If you are looking for a way to liven your Among Us matches up, this is what you should know about the Snitch mod.

What is the Among Us Snitch mod?

The Among Us Snitch mod adds an exciting new dynamic to the late-game. One Crewmate will instead be assigned the role of Snitch, and this player will learn who the Imposters are when they have only one task left. While this will be very helpful information when an emergency meeting is called, the Imposters will also learn who the Snitch is at the same time.

As such, the Snitch needs to quickly complete the tasks while evading the Imposters and convincing others to vote them out. While it removes a bit of the deduction from this social deduction game, it should make Among Us matches even more exciting as they reach their final moments. You can see it in action below:

It was created by @Ottomated_, who is best known for making a proximity voice chat mod for Among Us. It has made the rounds on YouTube and Twitch as players show this novel new way of playing Among Us off.

How to get the Snitch Among Us mod?

This isn't an official mode, so if you're playing the regular version of Among Us there is no way to access it. To play a match of Among Us that includes the Snitch role and the changes to the Imposters, you'll need to find and download a reliable and virus-free version of the Snitch mod online. The best way to do that is to join Sockfor1's SockDrawer Discord until you can access a download. After doing this, you'll have access to the new role and can play it with others.

Once it's downloaded, make sure you don't try to use it in the normal version of Among Us. Especially once an account system is implemented, modding the game and playing with others who didn't agree to it can cause frustration and possible ban. You'll need to play as the Snitch on a modded version of Among Us with friends that are okay with doing that.

What platforms is the Snitch Among Us mod on?

Because this is only available in the modded version of the game, this mode is only available if you're running the modded version of Among Us on PC. The game has been available on iOS and Android since launch, came to Nintendo Switch in December 2020, and will come to Xbox One and Xbox Series X later this year. You risk getting your account banned if you try to mod Among Us on these platforms.

If you don't have access to a version of the game that can be easily modded, you won't be able to try this out for yourself. You'll just have to wait for an official update from developer InnerSloth to change up how the game plays and can only watch videos of the Snitch Among Us mod in action.

Among Us is available now for PC, iOS, Android, and Nintendo Switch.