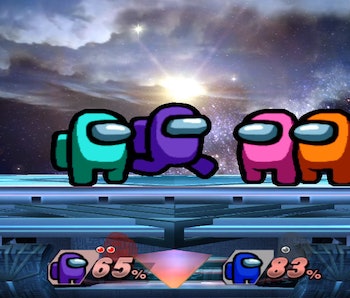 Among Us fandom just reached another level. We’ve seen impressive mods for the game itself, but now people are bringing Among Us into other games. One clever modder has added an Imposter to Super Smash Bros. Brawl with a full moveset and it’s a little mind-blowing.

The impressive hack stays extremely faithful to Among Us while building out a full Smash move set. The alien tongue assassination becomes a clever diagonal strike. There’s a whole attack based on the asteroid shooting minigame. And of course, the character’s Final Smash involves someone getting ejected into space. The mod even got the attention of Among Us’ developer Innersloth who commented on the video, saying, “This is the best!!”

If you’re feeling particularly adventurous, the modder has made the character available to download. That can be a little daunting for people who aren’t used to hacking consoles, so here’s a little help if you’re curious about trying it. Just be warned that this can be a risky process if you don’t know what you’re doing, so you might be better off just watching the YouTube video and enjoying it passively.

How to play as Imposter in Super Smash Bros. Brawl

According to the YouTube description, you’ll need a few things here. For one, you’ll need the mod itself. It’s available to download here for anyone curious about trying it out. Imposter can be added to hacked versions of Super Smash Bros. Brawl on the Nintendo Wii.

The character isn’t built for the popular community mod Project M, so you’ll need to actually mess around with your old Wii to make this work. Hacking your Wii is a complicated process, but the mod’s creator points to a handy forum post explaining how it works. You’ll want to read up on that for the full process, but here are the broad strokes.

First, make sure that your Wii is Version 4.3. You’ll be able to see that in the Wii Options menu. From there, head into your system settings, click Internet, then Console Information. You’ll find your MAC Address here, which you’ll need, so write it down.

Now you’ll need to head over to this website and enter that code, as well as your Wii version info. Once you do that, you should get a new message on your Wii. Open it, and you’ll eventually be prompted to install the Homebrew channel.

Once installed, you’ll have to load these files up from your computer onto an SD card. You’ll need to load the Imposter files you downloaded to this card as well. This forum post provides additional information about the intricacies of Brawl hacks if you find yourself especially lost. Load that card into your Wii and you should be good to go.

As we said previously, this is a complicated and risky process, so make sure you’re comfortable using your Wii as a guinea pig. These are the broad strokes to get you started, but you’ll want to take a deeper dive into the forum posts listed to make sure you’re on track. If you do get it working, have fun trying out one of the most impressive Smash Bros. mods we’ve seen in years.

More like this
Gaming
Sep. 29, 2022
Mario Kart 8 and 5 more of the best Nintendo Switch party games
By Jess Reyes
Gaming
20 hours ago
How to find fresh designs to upgrade and decorate your Splatoon 3 locker
By Hayes Madsen
Gaming
Oct. 3, 2022
How Minecraft is building a more empathetic metaverse in the classroom
By Jen Glennon
Related Tags
Share: