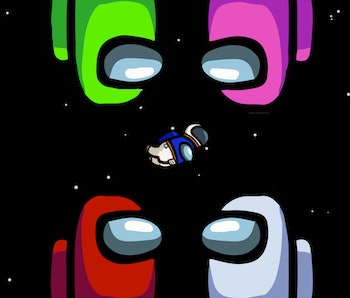 Social deduction game Among Us is a bonafide sensation, but the space-themed riff on the popular party game Mafia is plagued by one of the biggest issues in competitive online gaming: people that leave when they don't get what they want.

Among Us has attracted millions of players from around the world. That massive fandom has propelled Among Us developer, InnerSloth, to indie studio stardom but it has also brought about a host of issues.

Aside from hackers running rampant in lobbies, Among Us suffers from this serious leaver problem. Players have a tendency to quit the game when it doesn't go in their favor, which ruins the entire match for everyone else. Currently, there's no punishment for leaving a game early or after you die — or if you don't get the role you want — but fans have been clamoring for a leaver penalty for months.

InnerSloth recently added a five-minute ban for anyone who intentionally leaves a game three times, but players have found ways to bypass that punishment. The title also doesn't notify players that there will be a repercussion if they leave, like online titles Apex Legends and Overwatch. Both of those online games have dabbled in penalties when players leave a match early. In both cases, leaving competitive matches could result in a temporary ban — meaning that players won't be able to jump right into another match.

Among Us needs a stricter and more up-front disconnect penalty system like this to make playing in public lobbies less of a headache.

Each round of Among Us randomly assigns players one of two roles, "Crewmates" need to complete a series of tasks while trying to sniff out who among them are the "Imposters," who are trying to murder the crew. Many gamers prefer to play as the murderer and will leave a game instantly if they don't get Imposter that round, while others disconnect as soon as they're killed.

Leaving early as a Crewmate reduces the tasks that need to be completed to win, which can swing the game in favor of experienced Crewmates or make it easier for the Imposter to win when there's one fewer spaceman to murder. Attempting to leave a game should bring up a message that warns players they'll be penalized if they choose to leave, just like in Overwatch and Apex.

Simply informing players of the punishment and laying out how much time they'll be banned for could prevent certain players from quitting instantly. The game should also ramp up ban-time if certain players continue to quit even after being banned for five minutes.

All of this should be appear in the main menu or as a warning before players leave that clearly states how many games they've left recently and how long their punishment will be if they chose to leave again.

Of course, some players might actually need to stop playing for non-game related reasons, so the ban-time should be based on how often an account leaves games. InnerSloth hasn't announced teased anything about tweaking its ban policy, but the developer is working on a friends list system that could help solve the game's leaver issue.

The three-person development team revealed it wants to add a "friends list of account system" in-game to make it easier to start games with friends straight from Among Us. This might also be useful to better track players' disconnect rates to weed out the serial leavers and make public lobbies a bit more enjoyable.

One thing's for sure: Among Us needs a way to track and penalize leavers who make the overall experience worse for everyone else.

More like this
Gaming
8.12.2022 1:30 PM
Tower of Fantasy falls short of Genshin Impact in one key way
By Jess Reyes
Gaming
8.11.2022 7:30 PM
You need to play the most delightful management simulator on Xbox Game Pass ASAP
By Hayes Madsen
Gaming
8.10.2022 8:04 PM
Everything you need to know about FFXIV patch 6.2, Buried Memory
By Hayes Madsen
Related Tags
Share: