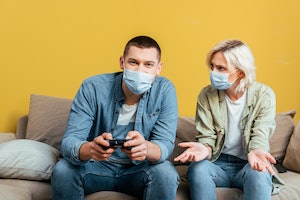 Video games in 2020: How a wild year changed the industry forever

2020 was an unprecedented year for everyone and every industry, and video games are no exception. Gaming not only became a prominent and important activity for many during Covid-19 quarantine, but the PS5 and Xbox Series X were released as well. Coming into 2021, a Nielsen company SuperData looked back on 2020 and analyzed its important developments.

4. The pandemic made gaming more popular than ever

While 2020 was bad for many entertainment industries, video games saw massive growth. According to Superdata, the whole industry grew by 12 percent year over year. "Earnings for game types popular in North America and Europe grew significantly due to the pandemic’s impact on those regions," the report explains.

It turns out that 55 percent of United States residents actually played games in 2020, and 27 percent of those people "used games to stay in touch with friends and loved ones or socialize with new people." While the report specifically credits Call of Duty: Warzone and Animal Crossing: New Horizons, the popularity of games like Among Us and Fall Guys also makes this change very clear.

A lot of that growth has been spearheaded by games like Honor of Kings and Peacekeeper Elite, which are very popular in Asia but not as widely played in North America. As these types of games remain popular and continue to grow, don't expect them to go away any time soon, even if they aren't your personal preference.

Looking at the 10 Top premium console games of 2020 though, it's clear that games-as-a-service titles are still quite successful. While we've seen flops like Marvel's Avengers this year, Call of Duty: Modern Warfare was still the biggest game of 2020 thanks to Call of Duty: Warzone. Call of Duty: Black Ops Cold War also made the list at #6, and games like with active post-launch support like FIFA, NBA 2K, Grand Theft Auto 5, The Sims 4, and Animal Crossing: New Horizons also made the list.

It's clear that when done well, games-as-a-service games and post-launch support can be extremely beneficial to the success of a game and its long term revenue. Like with free-to-play and mobile games, expect developers to double down on this style of games as they've proven to be especially lucrative in 2020. While Marvel's Avengers shows that these games can flop, when done right they work wonders for publishers.

While fans of more linear, single-player experiences might be worried by the previous fact, SuperData also showed that single-player games also did incredibly well in 2020. Cyberpunk 2077 and Doom Eternal also made the year's top 10 list in sales at #8 and #10, respectively. The report also praised games from Sony like The Last of Us Part 2 and Ghost of Tsushima.

The success of all of these titles demonstrates that while they are not as lucrative in terms of long term revenue, single-player games can still garner a lot of money for their publishers. Cyberpunk 2077 is a prime example, as that game still managed to be the 8th biggest game of the year even though it came out on December 10 and was met with severe backlash.

No matter what kind of game you enjoy, it's clear that they really only saw growth in 2020. Hopefully, 2020 will be just as good. SuperData believes that "the long-term habits formed during lockdown are here to stay," even if revenue flattens, and that the industry will continue to grow, diversify in content, and consolidate.