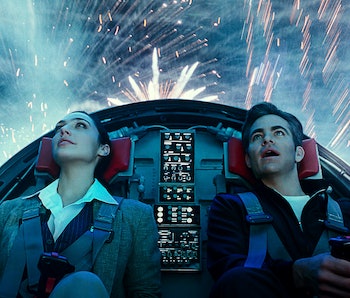 Look, up in the sky! It's a plane... you can't see. Since the beginning of Wonder Woman's comic book history, the Amazonian superhero has flown the friendly skies in an "Invisible Plane," alternatively known as the "Invisible Jet," her primary mode of transportation from before she gained the ability to fly on her own.

Here's where the Invisible Jet in Wonder Woman's comics came from, and why it's more than just a kooky comic book plane.

Warning: Spoilers for Wonder Woman 1984 ahead.

In Wonder Woman 1984, now in theaters and streaming on HBO Max, Diana (Gal Gadot) resurfaces from hiding to save the world, and the '80s, from Maxwell Lord (Pedro Pascal), an oil magnate who wants to use a mystical relic to turn his failing business around. Accompanying him is Cheetah (Kristen Wiig), an awkward archaeologist turned supervillain harboring jealousy towards Diana.

In the middle of the movie, Diana and her magically resurrected beau, Steve Trevor (Chris Pine) steal an Air Force jet in order to get to Cairo, to quickly catch up with Maxwell Lord before he causes a mess in the Middle East. But when Diana forgets to tell Steve about a new invention called "radar," which allows the Air Force to track the stolen plane, Wonder Woman quickly improvises by coating the plane with the same Amazonian magic that hides Themyscira.

When Diana successfully camouflages the plane, the two briefly enjoy the sights of Fourth of July fireworks before continuing the mission to stop Maxwell Lord.

"Out of the blue sky hurtles a silent transparent plane," reads the narration.

It wasn't a mistake that creator William Moulton Marston, credited as "Charles Moulton," introduced Wonder Woman flying the Invisible Jet. A psychologist credited with co-creating the lie detector, Marston aimed to use Wonder Woman to teach young, impressionable readers psychological theories by masking comic book zaniness for socio-political allegories. The Invisible Jet, according to scholars, represented the invisible compliance of women who worked in male-dominated industries during the Depression.

In the 2019 book Now I Know: The Soviets Invaded Wisconsin?!, author Dan Lewis wrote about the Invisible Jet and its "hard to see" symbol:

The planet moved quickly and went undetected, all while doing the job it was tasked with; similarly, women of the era were expected to avoid conflict wherever possible, instead focusing solely on getting their work done. As the years trickled by however, this allegory was lost. And perhaps coincidentally, the Invisible Jet became less and less important in the Wonder Woman storyline. By 2010, it was something of a joke."

Despite its lost meaning and obsolescence as Wonder Woman learned to fly on her own, the Invisible Jet always stuck around in some fashion. Over time, the Jet received multiple different origins as new writers took on scripting Wonder Woman and DC Comics as a whole rebooted (multiple times) its mainstream continuity.

During John Byrne's run on Wonder Woman in the mid-'90s, the acclaimed comic book writer gave the Invisible Jet a comprehensive sci-fi origin as a sentient alien "morphing crystal" that responds to Wonder Woman's thoughts. It even gains a name: "WonderDome." It was formally killed off in Wonder Woman #201 by Greg Rucka, but eventually, Batman gifted Diana a new jet.

While Wonder Woman doesn't use the Invisible Jet all the time, it's always nearby whenever she needs to fly fast or transport multiple people. As a result, the Invisible Jet continues to make appearances in Wonder Woman-related media (memorably the live-action TV series starring Lynda Carter) as well as other comics and cartoons, most recently the popular streaming series Harley Quinn. The good thing with being invisible is that you can't say it'll ever go out of style.

Wonder Woman 1984 is now playing in theaters and streaming on HBO Max.