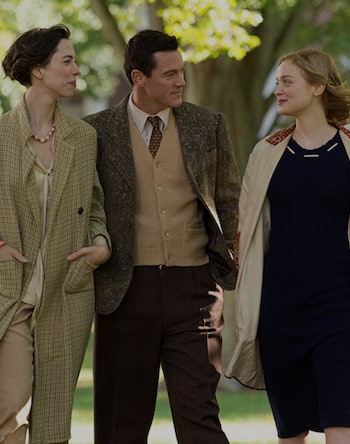 Wonder Woman’s first standalone motion picture re-established the DC superheroine as a symbol for feminism, peace, and equality when the the movie starring Gal Gadot blew up at the box office this summer.

But filmmaker Angela Robinson saw Wonder Woman’s origin story worthy as a movie of its own.

“I was struck that there was this incredible love story at the core of who Wonder Woman was,” Robinson tells Inverse. “If you’re going to make a movie about Wonder Woman, you need to understand the women in [Marston’s] life. You wouldn’t actually understand Wonder Woman if you paint at it from just his point of view.”

Together, the trio created the massively popular character, who made her debut in All Star Comics #8 in October 1941, but they also broke new ground in the science of interpersonal psychology. Marston played an integral part in the invention of the polygraph machine, conventionally known as a lie detector, but the psychologist wondered how to put forth his ideas into the broader culture outside academia. In the early ‘40s, that meant comic books.

“Not even girls want to be girls so long as our feminine archetype lacks force, strength, and power,” Marston wrote in The American Scholar in 1943. “Not wanting to be girls, they don’t want to be tender, submissive, peace-loving as good women are. Women’s strong qualities have become despised because of their weakness. The obvious remedy is to create a feminine character with all the strength of Superman plus all the allure of a good and beautiful woman.” That was Wonder Woman, who he developed with his wife and their partner.

Robinson’s film is, at its core, a love story, albeit one that just so happened to be between three extraordinary people.

The director was drawn to Wonder Woman as a child; the heroine’s role as the only female superhero then introduced her to representation in comic books. But she didn’t learn about Dr. Marston, who saw “great educational potential” in comic books, until adulthood.

“That began my odyssey,” she says. “I became intrigued by how Marston’s theories, inspired by the feminism and brilliance of these two women, all came to create this superhero we all love today.”

In what ways did you use Dr. Marston’s theories in the making of the movie?

I read all his books. The one that most resonated for me was the Emotions of Normal People. The first line of it is, “Are you normal?” and then spends the next 400 pages dissecting his idea. I thought that was so remarkable.

He came up with the psychological theory about human behavior: dominance, inducement, submission, compliance. In the film, I structured every scene around every one of those categories. For instance, the scene where Olive first comes into the lab and meets Elizabeth, that scene is about dominance — Elizabeth asserting her dominance over what’s happening. I really embedded his ideas into the writing of the film.

How did you prepare your actors to embody these extraordinary people? Did you have them study Marston’s theories as well?

Once I had everybody in the film, I sent over this massive bibliography, because I’ve been researching it for so long. Two-hundred pages, all books and articles. Luke [Evans] did a bunch of research on Marston’s theories. Rebecca [Hall] became fascinated. Before we even met she considered adapting the movie herself. She knew all about them.

I talked to the actors a lot about consent and power throughout [production]. Marston’s theory was that these dynamics don’t just play out in sex but also in all relationships all the time. I kind of infused the whole thing, even how I would direct them. It took over my whole thing.

You say you wanted Professor Marston to be, above all, a love story. In what ways did that dictate how you made the movie?

I thought the content itself was so potentially controversial, I didn’t want to “otherize” their experience. The subject matter could easily become exploitative or gratuitous. So I made the decision to lean into the “prestige biopic” of it all. I wanted the audience to feel what it feels like to fall in love. I really leaned into the trappings of “the romance,” “the biopic,” to make it accessible.

I didn’t want winks or quotes around anything. It’s just three people who are falling in love. I also just found it pretty cool and subversive in and of itself to use what we normally see heteronormative for a different kind of story.

Did your identity as a queer woman of color play a role in how you made the movie?

I worked with this idea of the female gaze with the cinematographer. I don’t feel like female desire has been explored very much. Representation is very important to me. I’ve worked on shows like The L Word and True Blood where I know as a viewer and a filmmaker of color how important it is to see myself. So I took a lot of care to try to represent the poly aspects in a respectful way. I consulted with two women — who rather be called rope experts than dominatrixes — in order to craft the rope work and to understand that aspect.

I was gratified because one of the women, who was there to help us in the scene where Elizabeth first ties Olive in the burlesque club, wrote me an email that said [the scene] was the best rendering of consent I’ve seen on film. “Our community’s always maligned, representation of kink are always nonconsensual or coercive,” and it blew me away. I was very careful of consent tracking their decision-making. They’re always saying, “Are you okay? Is this what you really want?” which ended up being really sexy.

Did you have any conversations with Patty Jenkins? Was there any exchange of ideas?

No, Patty and I knew each other a little bit. We both cut our first features across the hall from each other a decade ago. A mutual friend put us in touch over emails. We exchanged, like, “Isn’t it funny we both found our way to Wonder Woman in the same year?” We just emailed back and forth. I said, “Congratulations,” she said, “Good luck.”

We’re 70 years removed from the events of Professor Marston and things still aren’t great for women. What do you hope people in 2017 take away from your film?

Wonder Woman is all about living your truth and being true to yourself. I am glad women are coming together, speaking out against oppression, and that their voices are starting to be heard. I feel that something is starting to happen that is really feminist, and I think it’s really powerful and empowering that women can get strength from each other to help find their voice and stop oppression.

Wonder Woman literally came out of feminism — [the Marstons and Byrne] were feminists and they were actively engaged in creating a feminist superhero, and part of that is finding your voice, speaking out, and fighting to make the world a better place.

Professor Marston and the Wonder Women is in theaters now.