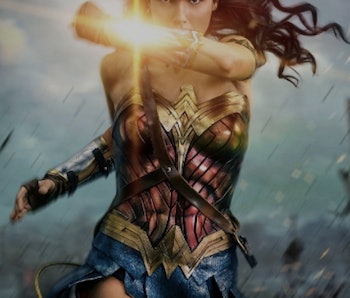 Wonder Woman’s Lasso of Truth is a magical golden rope spun from Aphrodite’s girdle that — when wrapped around someone — has the power to force a person to spill the truth.

Its similarity to a polygraph test is not on accident: The creator of Wonder Woman, psychologist William Moulton Marston, is credited with inventing the first version of the lie detection test in 1915. Marston was obsessed with the science and detection of deception, making sure that his heroine was a master of delivering the truth.

Marston had other questionable scientific interests that are widely presumed to have influenced the creation of Wonder Woman. Apart from the assertion that deception could be detected by blood pressure, he ran experiments in 1919 and 1921 on the “Sex Characteristics of Systolic Blood Pressure Behavior.” In these experiments, reports Jill Lepore in The Secret History of Wonder Woman, he’d try to get female participants upset and then aroused. His conclusion from these studies? That not only are women more emotional then men, but that emotions were what stirred sexuality. Bear with us here: An oversimplified line was drawn on the emotionality of women and its connection between blood pressure and emotions, indicating that — drum roll — women were more honest than men.

While Marston was progressive with the feminist messaging he included in the comics that debuted in 1941, the science he used to inform his work simply hasn’t held up in the same way. Today, the validity of polygraph testing is very controversial. According to the American Psychological Association, “There is no evidence that any pattern of physiological reactions is unique to deception. An honest person may be nervous when answering truthfully and a dishonest person may be non-anxious.”

Marston’s belief that changes in breathing, blood pressure, and sweat can result in the detection of a lie has, in the decades since his own conclusion, proven to be something that just doesn’t add up. It is true that stress — whether it be lying or being accused of lying — triggers hormones that in turn increase blood pressure. But to say that blood pressure is an ubiquitous measure for emotions is a simplification of the science.

The relationship between emotions and blood pressure is an area of study still very much in the process of being understood. While some emotions trigger a physiological response, that result is not consistent across research. A 2009 study in the Journal of Cross Cultural Psychology found that European-American women had increased blood pressure measurements when talking about something emotional, but Asian-American women did not. There’s also a 2013 study in PLoS One found that study participants who were triggered to feel angry had increased blood pressure, participants who instead felt shame had no physiological response. Other scientists found in 2014 that people with higher blood pressure actually demonstrated emotional dampening; they had a more difficult time accurately pinpointing fearful, sad, happy, and angry emotions in other people.

In sum, the research is all over the place — a far cry from Marston’s confidence that blood pressure and emotion were intrinsically tied in a nice, cut-and-dry bow. Meanwhile, scientists discovered in 2015 that women react more emotionally to negative images than men, but researchers are unclear whether this is an innate quality (like Marston believed) or something that is an effect of social conditioning.

None of these studies have to do with lying. In fact, research shows that everyone lies almost all of the time. That doesn’t mean that modern day folks don’t have the same biased presumptions as Marston: 2010 research in the Journal of Language and Social Psychology demonstrates that people inherently presume women lie less than men, although that isn’t true. Wonder Woman is the gold standard for truth-sayers, but it doesn’t mean that she’s representative of scientific accuracy.

More like this
Science
8.14.2022 9:00 PM
Ancient lore reveals how warriors manipulated their enemy’s senses in battle
By Adrienne Mayor and The Conversation
Science
8.13.2022 10:30 AM
The best superhero movie on HBO Max resurrects an ancient warrior myth
By Tara Yarlagadda
Science
8.10.2022 3:00 PM
Asteroids may have carved Earth's landforms as we know them — study
By Doris Elín Urrutia
Related Tags
Share: