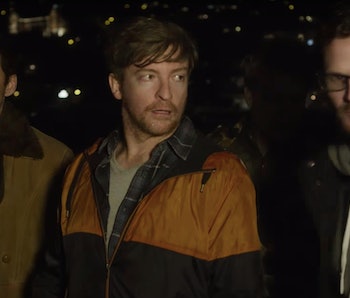 Rhys Darby is the funniest supporting actor in New Zealand's comedy mafia. Whether he's playing the band's hapless manager Murray in Flight of the Conchords or a rival monster in Taika Waititi's vampire mockumentary What We Do in the Shadows, you can count on Darby to provide a few memorable laughs without stealing the show.

But Darby may get a leading role if a long-rumored spinoff finally gets made. No, we're (sadly) not talking about a Murray Hewitt solo adventure, but it turns out the What We Do in the Shadows’ oft-discussed werewolf spinoff, We’re Wolves, is still on the table — despite some rumors to the contrary.

In an interview for his new podcast Aliens Like Us, Darby tells Inverse that he's ready to make his werewolf movie, there's just one problem.

“We always want to work together if we can,” Darby says, “My werewolf pack is still in New Zealand, so it would make no sense for me to be in America. They did have some werewolves in the American version, and I kinda think they’re just holding my character and my bunch of werewolves back in case they do the [We’re Wolves] movie, which they’ve said they wanted to do. So I’m kinda hoping… we’re waiting for that. But Taika’s so busy, he’s going to make a decision to step back from whatever [in order for that to happen].”

Waititi confirmed he planned to write and direct We're Wolves with Jemaine Clement – who worked with Darby on Flight of the Conchords as well as Shadows – way back in an October 2017 interview with Build. However, he noted, “You aren’t going to see it for seven years. “We are notoriously terrible at writing together, Jemaine and I. Usually takes place over emails. So we’ll email each other one line of dialogue once a month. What We Do in the Shadows took six years to write.”

Darby’s not joking about Waititi’s packed schedule. The director is currently attached to the football comedy Next Goal Wins, a live-action adaptation of the anime classic Akira, and Thor: Love and Thunder.

It doesn’t stop there. After Jojo Rabbit snagged the Oscar for Best Adapted Screenplay, The Hollywood Reporter said Disney was “courting” Waititi for a future Star Wars project. Waititi directed an episode of The Mandalorian, and lended his voice talents to the show’s trigger-happy droid IG-11. He also made the hugely successful Thor: Ragnarok, and with Marvel Studios head Kevin Feige reportedly taking a larger role in the Star Wars franchise going forward, another collaboration seemed pretty plausible.

Unfortunately for Star Wars stans craving a Taika trilogy in the years to come, Darby says he doesn’t think it’s too likely.

“He might want to stay away from that, because Star Wars people are so insane,” Darby jokes, referencing the controversies surrounding both The Last Jedi and Rise of Skywalker. “If you don't do it right, they'll hunt you down and try and kill you.”